In the deep end

One often thinks of serene waters or swaying trees while thinking of the sea side.

BENGALURU : One often thinks of serene waters or swaying trees while thinking of the sea side. But this city-based photographer’s work captures how climate change and development has affected it. The photographs taken by Selvaprakash Lakshmanan look at the changing coastal landscape that has been affected by erosion, chemical plants, rising sea levels and over-fishing. “It also shows  communities – 250 million people live within 50 metres of the Indian coastline – plying their trades, often as their forbearers did, and trying to cope with every changing reality,” says Lakshmanan about his ‘Life in Troubled Waters’ project, which features 22 photographs. 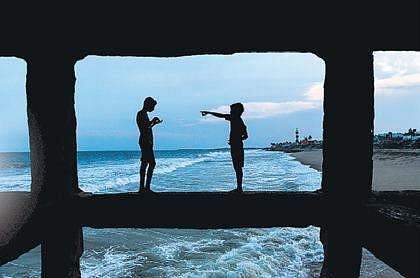 The series began 10 years ago, and had Lakshmanan work on this alongside his other projects. The main idea, he says, was to report the conflict between Indian fishermen and Sri Lanka’s Navy in the Gulf of Munnar. “I realised that there was a narrow understanding of the problem. This made me want to explore the wider issues of what forced these fisherman to go into Sri Lanka’s waters,” explains the 41-year-old. This led him to unearth more issues plaguing India’s coastlines and the communities living there.

Lakshmanan’s travels also showed that the problems were different for different areas. For example, beach sand mining in Kerala is eroding the coastline, but the process of cleaning the sand means polluted water is re-released into the sea.  “In Tuticorin, the coal power station is blowing ash into air, stunting the mangrove forest that helps protect the coastline,” he adds.

Lakshmanan also interacted with fishermen, who often shared stories of how constructions had taken a toll on their life. While some spoke about villages getting destroyed by the encroaching sea, others revealed how the waters have come closer, almost touching their doorstep. “Some Tamil fisherman said the Sri Lankan Navy made them hold ice bricks as punishment.

Another recounted how he swam for eight hours to reach the shore after his boat sank,” he recalls, adding that many of these issues are not easy to convey in an image. Though a challenging task, the project has been rewarding. Lakshmanan was able to give back to the communities by sharing the works with organisations working on such issues. “Working on a long-term project also helped me experiment with my photography,” he says.The exhibition will be
held at The Studio, Cooke Town, from Dec 8-22.