HAL confident of getting its jet trainer project out of spin

BENGALURU: For state-owned aircraft marker Hindustan Aeronautics Limited (HAL), the 20-year-old Intermediate Jet Trainer (IJT) project still remains a major challenge, especially after the Indian Air Force (IAF) walked out of the project citing delays and design flaws. But the Bengaluru-headquartered defence PSU has not given up. After flying the aircraft after a gap of three years, HAL is now confident of going back to the IAF with a better product to train its fighter pilots. 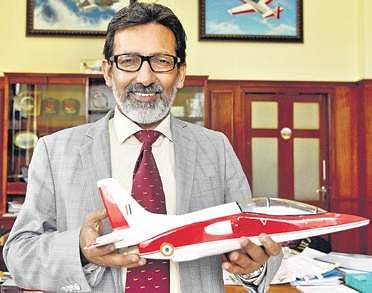 Given the delays and failure to clear spin tests -- which is a critical feature in a jet trainer -- the IAF had told HAL to junk the project. “During the meeting in 2018, the IAF told us to close the project. However, I had promised them of flying the aircraft in April after completing all modifications required to take up the spin tests,” Arup Chatterjee, Director, Engineering and R&D at HAL Design Complex in Bengaluru, told The New Sunday Express. “We flew the aircraft in April. We have taken it as a challenge and are confident of completing all tests by April 2020 and after that we will again go back to the IAF,” he said.

They plan to start spin tests in October this year and it will go on for six months. To take up the tests, the HAL has completely modified one of the 12 aircraft that are manufactured after the IAF had given a go-ahead for Limited Series Production. The modification of second aircraft is under way at HAL Bengaluru complex.

The project to design and develop an intermediate jet trainer in India was started way back in 1999 when the Cabinet Committee on Security sanctioned Rs 180 crore (for two prototypes and certification process) and the project got more funds subsequently. It started off well and the first flight took to the skies on March 7, 2003.

But the project hit a turbulent phase when it suffered many setbacks, including a crash in 2011. The spin test that first started in 2015 remains the biggest challenge and hurdle. When the aircraft gets into stall, it starts losing altitude and starts spinning as aerodynamic and inertia forces take control. To train the pilots, jet trainer has to be designed in a such a way it gets into stall and spin and gets out of it. “By 2012, we had completed all tests and only spin was remaining. Stall itself was critical, but spin is another ball game altogether,” said Chatterjee explaining the complexity of spin tests.As the PSU was not able to fix the issue on its own, it consulted external agency BAE Systems and based on its recommendations, modifications were carried out in the tail frame. In all, 650 parts have to be modified.

The HAL hopes to complete the tests and certification process by the time Kiran aircraft are phased out. “IAF has gone for life cycle extension of Kirans, which will continue to fly till around 2024 and by that time IJT will be ready with all certifications. We will go back to IAF and I am positive that IAF will accept it,” the director added.

“Recent flight trials have given us lot of hope and feedback from the pilots, and that is very good,” says Ganesh Prasad, IJT Project Manager.

However, not everyone is equally confident. “There is a lot of uncertainty with HAL projects and the IJT is one such example,” said Air Marshal (retired) B K Pandey, former Chief of IAF Training Command. “The IAF is not waiting for the IJT. They are going ahead with their training programme and have made some changes. Earlier, they had three stage-three aircraft, now it is three-stage two aircraft training. Stage one and two is done by Pilatus and third stage on Kiran Mark II. I don’t see IJT programme succeeding at all.

However, if HAL brings out a succesful aircraft,  some chief may revive it,” he said.

Stay up to date on all the latest Bengaluru news with The New Indian Express App. Download now
TAGS
bengaluru HAL