BENGALURU:  It all started with seventeen Tespesia Papulenia (Behandi) trees in Marathahalli two years back. These trees, blocking an advertisement hoarding, were mercilessly poisoned, leading to a large scale protest and the filing of an FIR against the accused. Before this incident in 2017, the city used to see 20-30 trees poisoned annually, left to die a slow death and make way for better visibility for hoardings, shop signs and even houses. However, after the ‘Marathahalli incident,’ tree poisoning incidents have come down, experts say, but not by much. 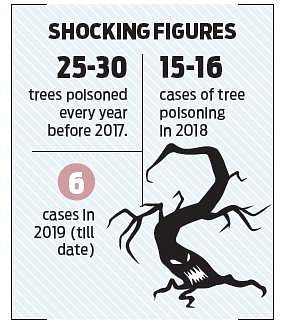 This year alone, 6 incidents of tree poisoning have been recorded so far. “Five of these were in Hebbal and one in Jayanagar. The Hebbal trees were poisoned to give better visibility to a shop in the area,” said urban conservationist Vijay Nishanth, popularly known as the ‘Tree Doctor’.

According to him, besides the usual culprits, even private home and land owners are responsible for carrying out the heinous act. “It could be for any reason, they might need space to park an extra car or not like the tree branches blocking their house. Healthy trees usually cannot be chopped off as permission from the BBMP is not given so they resort to poisoning,” he said.

“Builders too are responsible for weakening of tree roots as they either fell trees in front of their property or cut their branches in such a way that trees become sick and fall. Further, the area around their building or house is cemented, leaving no way for rain water to seep in. We need proper norms for tree protection and they should be strictly implemented with heavy fines imposed for every tree that is lost due to unsustainable construction,” said Nishanth.

Poisioning ensures that the tree dries up in 6-7 months, making the process of getting permission easier. “There is a lot of awareness now but these people poison trees in the middle of the night and hide all traces,” Nishanth explained. In his opinion, while there was also fear of action now, there is scope for instilling a healthy sense of respect for trees, as well. “There are rules and we continue working to create more awareness on the harmful effects of tree poisoning.”

Stay up to date on all the latest Bengaluru news with The New Indian Express App. Download now
TAGS
Poisoning Trees