What’s common among all the toppers is sheer motivation and hard work. Speaking to The New Indian Express over the phone from his hometown in Hassan, Phaneendra said it was one of his juniors who informed him that he had made to the list of top 50 students. Son of Madura, a junior engineer of KPTCL, and Ramesha, a government high school teacher, he now wants to become a surgeon.

He is a student of Jawahar Navodaya Vidyalaya in Pune. When he was in Class 10, Phaneendra was selected for a scholarship programme meant to train economically underprivileged students for competitive exams. At the school in Pune, he excelled in his studies. “Food was secondary. My main aim was to clear these examinations,” he said.

The second highest scorer in Karnataka, P Mahesh Anand, secured an All India Rank of 43 with a score of 685 (99.99 percentile). A student of Sri Chaitanya Techno School, Mahesh said he always wanted to be a doctor because of the service one can provide to others. He has applied to AIIMS and JIPMER like the other two toppers.

The third topper in the state, who is also one of the top 20 among the female students, Pragya Mitra stood 99th in the All India Ranking. She too scored a percentile of 99.99 and 680 marks out of 720. A student of Sri Kumaran Children's Home, she said she now wants to become a cardio surgeon. “I wanted to become a cardio surgeon ever since my father developed a cardiac problem,” she said. She added that while she enjoys dancing and drawing on a regular basis, she had to compromise on these for NEET preparations. 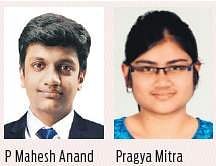 ‘Overseas medical aspirants may be hit’
With a large number of students appearing for professional courses abroad, intermediate agencies are apprehensive about the future of these aspirants due to a change of rule that makes their entry into another country difficult. “This year, around 15 lakh students appeared for NEET but many might miss out on the opportunity to study in a foreign medical institute.

This is because last year MCI had made NEET mandatory for all. We saw a surge in the number of applicants last year as the High Court gave a one time exemption to all the students to study medicine abroad. However, this year we expect that there may be a 25-30% fall in the number of applicants,” said Saju Bhaskar, president, Texila American University, an MCI recognised overseas medical university.

Stay up to date on all the latest Bengaluru news with The New Indian Express App. Download now
TAGS
NEET NEET examination Karnataka