This project of revamping this iconic structure is being undertaken under the Bengaluru Smart City initiative.

BENGALURU: Krishnarajendra Market (KR Market), which is nearing 100, is a significant step closer to getting a swanky mall-like look while retaining its aesthetic heritage characteristics. The tender called by Bruhat Bengaluru Mahanagara Palike (BBMP) is in its final stage of being sealed.

This project of revamping this iconic structure is being undertaken under the Bengaluru Smart City initiative.

As they did not get a bidder last time, the BBMP called a tender again and this time they are hoping to finalise the bidder. Once the work order is issued, it will take two years to complete the project.
The 14-acre KR Market has thousands of vendors selling vegetables to fruits and meat to household items flock here to sell their wares. However, the authorities are now streamlining the arrangement from the hitherto haphazard manner to a more organised system. At present, the basement parking facility is dumped with garbage, and the dark interiors of this place have turned into a shelter for stray cattle. 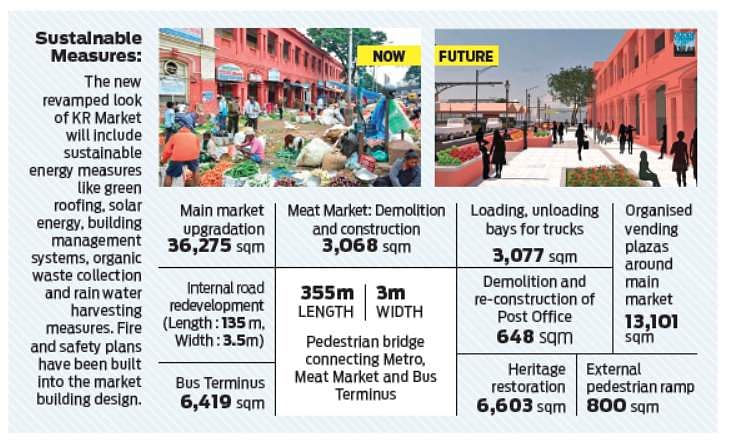 Under the new initiative, they are renovating the parking space on par with those in the malls with an automated parking system, which will bypass the parking mafia which is active here at present.
The Rs 58 crore project will also have pedestrian way from Chickpet Metro station. “Similar to Mantri mall, where commuters can access the mall directly from the metro station, this place too will get direct access from Chickpet metro station. This will also connect with the parking and bus shelter.

The idea behind this is to keep the premises clean and make more people use it. Many do not visit the place as it is not clean and connectivity is an issue,’’ Prakash K S, Executive Engineer (Smart City project), told TNIE.  KR Market looks a mess if seen from above the Mysuru flyover with trucks dumping vegetables and other goods erratically. But the project will provide for dedicated docks for loading and unloading of goods. Vendors inside markets have to take these goods in their respective trolleys. This is expected to streamline the delivery and accepting processes.

One of the major revamps is rebuilding the meat market here. “We will demolish and rebuild the whole meat market, making it air-conditioned. This is expected to keep the meat fresh,’’ an official said.
Food plaza and clean toilets will come up. External illumination for the heritage building will be provided, and the Police chowki and the postal building will be rebuilt.

The vendors who encroached upon pedestrian ways inside the market premises will be given a dedicated space with cleanly built-up shops. The place is of historic significance as it was the site of an epic Anglo-Mysore battle in 1791 with the British emerging victorious. The site transformed into a public space and over time became a market. In 1921, the Wodeyar Maharaja built the well-known red façade of the market.

Stay up to date on all the latest Bengaluru news with The New Indian Express App. Download now
TAGS
bengaluru KR Market