Post Ramzan, vendors take their pushcarts loaded with dried fruits worth lakhs of rupees to government offices thronging with citizens all day

BENGALURU: While city markets bear a strikingly calmer look once the month of Ramzan is over, many vendors continue to grapple with the spillover of their products. Dried fruits, for one, remain almost as popular among people even after Eid. Vendors trying to exhaust their stock have found a novel way to seek customers – they take their pushcarts, loaded with dried fruits worth lakhs of rupees, to the doorsteps of government offices.

They are bound to find new faces and a tremendous footfall each day, making it the best place to sell their products to sauntering crowds that often wait for long hours to get their work done. After the city railway station, government office premises make for the second best location for these vendors, where at least four pushcart vendors are seen at work. 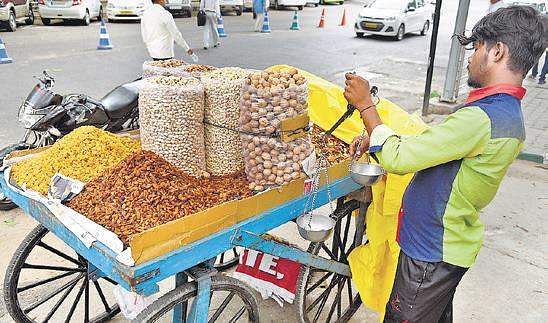 Suresh (name changed) from Ballari, who continues to make a living out of selling dried fruits procured from KR Market, has stationed his cart in the premises of a government building in the city. He told CE that he will be returning to his village after three months, when the stock worth Rs 2.5 lakh is likely to get sold completely. His family, he added, is also involved in selling the nuts and raisins at Majestic and Shivajinagar during Ramzan. Now, the family members have split and cater to the demand for dried fruits outside various government offices in the Central Business District, including MS Building, Public Instruction office, high court, and the nearby underpasses.

Suresh waits eagerly for the office time to get over, and takes advantage of a large number of new visitors to these offices on a daily basis, who often have to wait long hours to get their work done.His relative, Girish, who sells almonds, dates, walnuts, raisins, pistachios, gooseberry candy, among other items, said the prices have not gone down post the festive month. “None of the dried fruits sell for less than Rs 1,000 a kg. This is my second year in the trade. Two days of Ramzan fetched me Rs 90,000, which was more than sufficient. Now, we have to see through another two months of labour before we go back home,” he added.

Customers are aplenty. It is not uncommon to find litigants and advocates dash to the vendor near the high court to pack some snacks. Many also prefer taking them home on their way back and make calls to their families to confirm market prices before deciding the quantity of nuts that they will buy.