Father and baby: The unspoken bond

Every child develops an inherent bond with their mothers being in-utero.

BENGALURU : Every child develops an inherent bond with their mothers being in-utero. It is natural to understand the physical and emotional bonds established between mothers and their children right from the conception.  Over the decades majority of the parenting was the domain of mothers whereas safety and security needs were fulfilled by fathers.

But it is imperative to understand that both parents are important. There are natural differences in the parenting style between a father and a mother towards the child. In the recent times, higher percentage of women are educated, seeking job opportunities and career oriented and the changing family structures towards small and nuclear families has given rise to shift from conventional role assignments to shared responsibility in parenting. 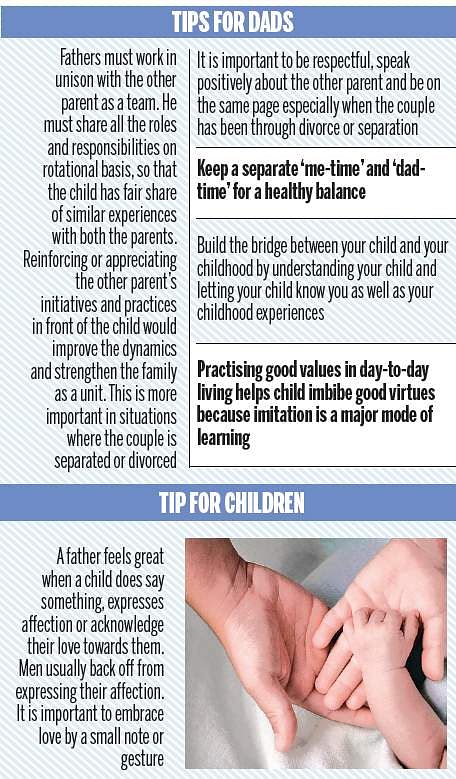 Henceforth, it is not surprising to see fathers nowadays do much more than what they did a generation ago – baby sitting, staying awake at night, drop off kids at school, helping with homework and attending to the basic needs of the child.

Evidences from most studies on childhood and parenting suggest that mothers try to tend a child with more warmth and reassurances when the child is in distress while on the other hand, fathers tend to inculcate curiosity, inquisitiveness, individuality and distress tolerance.

It is the healthy balance of both that leads to development of emotional regulation in children. Majority of the studies in behavioural sciences in the recent years have affirmed that having an involved father right from the beginning leads to better cognitive, behavioural, general health  and overall well-being of the child.

As a consequence, these children develop stable social connections as they grow older, learn to regulate their feelings and behaviour, acquire better verbal skills, intellectual functioning and academic outcomes.
There has also been variability between father-son relationships from father-daughter relationship.

Fathers tend to be more strict with their daughters during adolescence while sons assert themselves during the same age. It is preferable to practise the concept of authoritative parenting (medium on control and high on warmth) than being authoritarian (low on warmth and high on control) especially during adolescence. The authors are consultant psychiatrist, Fortis Hospital, Bangalore and consultant clinical psychologist, Fortis Hospital, Bangalore, respectively.