In toon with the times

BENGALURU: Fawzy Morsy has always harboured a dream – to visit India soon, and plan an exhibition, in Egypt and India, of cartoons made by prominent artists from both the countries. While he hasn’t been able to come to India yet, his works have been selected for an exhibition of foreign cartoons, organised by the Indian Institute of Cartoonists (IIC).

Morsy is among 80 international cartoonists whose works will be on display at Indian Cartoon Gallery till June 22. All the chosen cartoons were selected from entries sent to the Maya Kamath Memorial Awards (MKMA) held last year. The best entries were shortlisted by a jury that included the late playwright-actor Girish Karnad, sculptor Balan Nambiar, writer-editor Vivek Shanbhag and cartoonist B G Gujjarappa.

Most of the cartoons submitted were responses to the current political or social situations. For example, Morsy’s submission includes the hazards technology can have on human health, influence of social media on our lives and discrimination women face. The Egyptian artist says, “The caricature scene in India is very similar to the Egyptian one, because we face similar problems, like pollution, crowded public spaces, poverty, etc.” 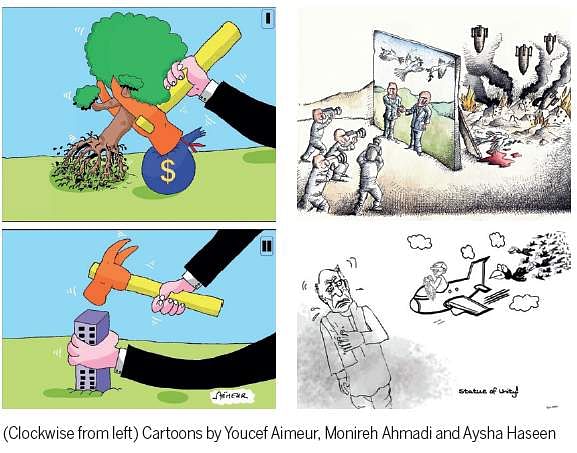 V G Narendra, managing trustee, IIC, however, feels Indian cartoonists are far behind international ones when it comes to presentation. The latter do not rely on captions, he says, adding, “Their work can be understood by people all over the world.”

Case in point: Algerian cartoonist Youcef Aimeur’s work on deforestation, which depicts a legal authority using a hammer to uproot a tree and plant a building instead. The only script is Aimeur’s signature, giving the whole piece a minimal look. “It’s what I like most about cartooning – the simplicity of passing messages to society without the slightest effort, and with humour,” the 40-year-old artist tells CE.

Agrees Aysha Haseen, a 47-year-old cartoonist who shuttles between Kerala and Dubai. Cartoons, she says, help her express her “genuine pain at the hypocrisy of political institutions and society.” Of the two cartoons she submitted, one was themed ‘blinded by patriarchy’ while the other delved into statue politics.
Haseen, in fact, was one of the only four female artists who took part in MKMA. She adds, “Women are never taken seriously in the creative world, especially in the field of satire and comics. They have always been considered ‘not funny enough’, and often face smirks not only from their male counterparts but also from conservative women.”

Gender inequality is not the only problem plaguing the scene. When asked about the nature of restriction in his country, Aimeur says things are better off in Algeria as compared to other Arab or African countries. “But the cartoonist still always has danger of being in trouble. His work could cost him his freedom or his life,” he adds solemnly. And the way forward? “Block any hate or trolls,” says Haseen, who has been at the receiving end of comments questioning her patriotism.