One of the key factors for the city’s propulsion into the top-10 league was that despite risk factors at the forefront of investors’ concerns, buyers continue to seek higher returns and are focused on value-added deals in the emerging markets such as India. This propelled Bengaluru into the top 10 destinations for cross-border investors for the first time since the survey began in 2014, it said. 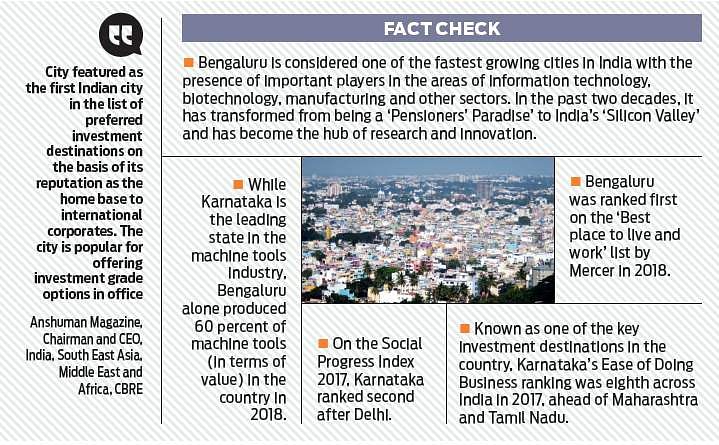 Anshuman Magazine, Chairman and CEO, India, South East Asia, Middle East and Africa, CBRE, said, “Bengaluru featured as the first Indian city in the list of preferred investment destinations on the basis of its growing reputation across the globe as the home base to several international corporates. The city with a significant talent base and world-class infrastructure is also popular for offering several investment grade options in office, retail as well as residential segments.”

The survey revealed that India was among the top five preferred markets (at number 4, with China at number 1, followed by Australia and Japan, and Hong Kong at number 5) in Asia-Pacific on the back of the launch of the first Real Estate Investment Trust (REIT) and the resulting improved market transparency. The first REIT by Embassy Group and Blackstone Group LP was launched in India in March this year.

Improved investor sentiment in office assets is likely to expose potential quality buildings as a fund-raising avenue for developers and also propel major corporations to lease/purchase space in these developments.
On the overall positioning of the Indian real estate market in Asia-Pacific, Magazine added, “A stronger interest in office properties followed by industrial and logistics, multi-family, hotels and retail were the preferred sectors of investment in Asia-Pacific. There is significant scope for investment in India and the rising consumption and growing demand, particularly in the logistics sector, will continue to stimulate investors to seek opportunities in this market.”

Stay up to date on all the latest Bengaluru news with The New Indian Express App. Download now
TAGS
bengaluru cross-border investors