After a gap of ten years, the Bruhat Bengaluru Mahanagara Palike (BBMP) officials have started the delimitation exercise.

BENGALURU: After a gap of ten years, the Bruhat Bengaluru Mahanagara Palike (BBMP) officials have started the delimitation exercise. Following the directives of the Supreme Court, Karnataka High Court and the Election Commission, the BBMP has to restructure the wards based on the population size.
BBMP held a meeting with the urban development department officials on Wednesday in this regard.
BBMP Commissioner N Manjunatha Prasad told TNIE that there was a proposal to reorganise the wards for the next year’s municipal elections, scheduled for August 2020. 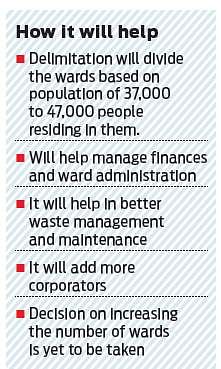 “Based on the population size of around 37,000-47,000, the boundaries of the wards will be redrawn. A rough draft has been prepared.  As per the 2011 Census the delimitation has to be done,” he said.

The delimitation was not done before the 2014 civic elections. So for the 2020 polls, it will have to be done. After the urban development department gives its nod, the revenue officials will survey the areas and redo the boundaries. A detailed discussion with corporators will also be held.

Prasad said the draft will be ready by August and will be open for public scrutiny for a month, It  will be finalised by October and ready for the next municipal elections.

S G Nagaraj, Chairman, Town Planning and Improvement Standing Committee, said there was also a proposal to extend the boundary of Bengaluru city and divide the city into three zones- -north, south and central. B H Anilkumar, Additional Chief Secretary, UDD, said they received details on ward boundaries and work was in progress.

Last year the BBMP standing committee had put a proposal to decentralise the civic agency into five corporations.  The BBMP was formed in 2007 with a total of 100 wards, seven CMCs, one TMC and 110 villages. In 2008, the government increased this to 147. In July 2009, it was further increased to 198.

Stay up to date on all the latest Bengaluru news with The New Indian Express App. Download now
TAGS
BBMP