According to a study by wakefit.co, one in every five Bengalureans (from a sample size of 5,000) suffers from insomnia, which is higher than the national average.

BENGALURU: According to a study by wakefit.co, one in every five Bengalureans (from a sample size of 5,000) suffers from insomnia, which is higher than the national average. Fifty four per cent of the city sleeps between 11pm and 1am and 25 per cent of them sleep less than seven hours. Ninety two per cent of the people use their phones before going to sleep. Experts say the number increases during elections, IPL and FIFA seasons.

Sports fever
Dr Satyanarayana Mysore, HOD Sleep Medicine & Interventional Pulmonologist, Manipal Hospitals Bangalore, says of the six insomnia patients he sees a week, two of them are in their 30s. “At the end of IPL, elections or say FIFA World Cup, I see two more new cases,” he said.Dr Sachin Kumar, senior consultant, pulmonology, Sakra World Hospital, added that a 28-year-old patient was brought in after he fainted while at work. He had a nervous breakdown and later, it was found that he was suffering from acute insomnia due to forgoing sleep to watch the FIFA world cup. Dr Kumar added that he sees more women suffering from insomnia. “Many people live in PG accommodations, away from their families. The cases are more among women probably because of restricted social mobility,” he said.  While tournaments do affect the sleep cycle of fans, they usually do not admit to the same. “The families complain that the kids were up late at night due to cricket or football matches,” said Dr Mahesh Gowda, psychiatrist, BR Life SSNMC Hospital.

Causes of insomnia
The common cause of insomnia among the young is Circadian Rhythm Disorder (disruptions to a person’s sleep patterns due to conflict with their internal body clock). Bright light exposure could also play a part in the same. “It stimulates the retina and which in turn stimulates the pineal gland, the sleep centre of the brain,” said Dr Mysore. The other reasons could also include anxiety and other psychological problems.

Dr Gowda says 60 per cent of cases he gets are from people in the age group 15 to 35 years. “They come with complaints of anxiety and depression. Sleep disorder is a by-product of this,” he said. Dr Mysore added that there aren’t many experts in the field. “Most approach their family doctors and take some sedatives, which is not the solution. Resynchronisation of rhythm is done through light therapy, which we use to reset the sleep centre in the brain,” he said. 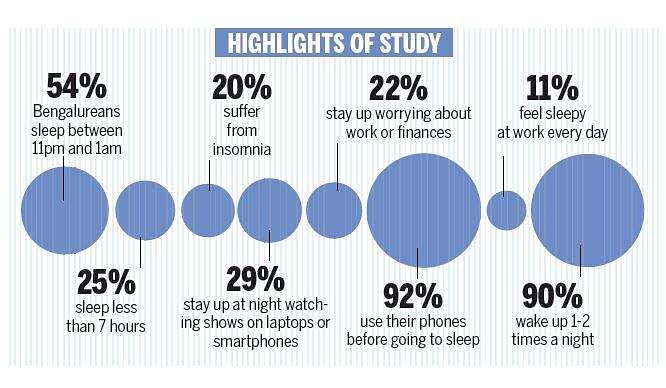 More from Bengaluru.
Now we are on Telegram too. Follow us for updates