Therefore, the court has given one more opportunity to the BBMP to comply the said order by November 27.

BENGALURU:  The Karnataka High Court on Monday directed the Bruhat Bengaluru Mahanagara Palike (BBMP) to invoke various clauses against the contractors appointed for laying and repairing of roads if there is any default on their part and use the compensation to be recovered from them for public needs. 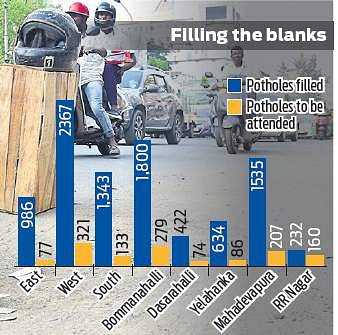 The court expressed displeasure as the BBMP failed to comply with its direction of October 27, 2019 to take all corrective measures and ensure that the pothole filling and providing smooth and motorable roads is undertaken in a scientific manner at the earliest. Therefore, the court has given one more opportunity to the BBMP to comply the said order by November 27.

The BBMP has also failed to comply with the court’s directions with regard to the wide publicity to be given to create awareness among citizens to claim compensation in case of accidents due to the poor condition of roads.

It also made it clear that its order does not mean that even in a frivolous case, the BBMP should grant compensation. All that the court recorded is the existence of the right of citizens to claim compensation and expected BBMP to act fairly. In view of the BBMP’s ‘defiance’, the court directed it to file an affidavit showing the cause as to why action should not be initiated against responsible BBMP officers under Contempt of Courts Act for non-compliance of the directions contained in the order dated September 9, 2019.

Stay up to date on all the latest Bengaluru news with The New Indian Express App. Download now
TAGS
Karnataka High Court BBMP

Over 20 per cent population increase their 'faith in God' during COVID-19 lockdown: Study