Buildings will either be repaired or demolished; 77 structures get notice

BENGALURU:  With illegal constructions mushrooming throughout the city, the Bruhat Bengaluru Mahanagara Palike town planning section conducted a survey and identified 178 high risk buildings that are in a dilapidated state in the city. Of these, BBMP issued notices to 77 buildings.The notices have been issued under Section 322 of the Town Planning Act. BBMP Commissioner B H Anil Kumar said the survey of old dilapidated buildings is being handled in two ways. One, BBMP will restore and repair the buildings and serve a notice to its owners. If a building cannot be repaired, then the structure will be demolished, he said.

He admitted that engineers and officials are responsible for improper enforcement of rules. It has been found that in many cases people did not even apply for commencement certificate and neither did they have occupancy certificate. There is only one squad so far to check all the illegal activities. But there is a need to strengthen the wing and start taking penal action against violators, Kumar said. 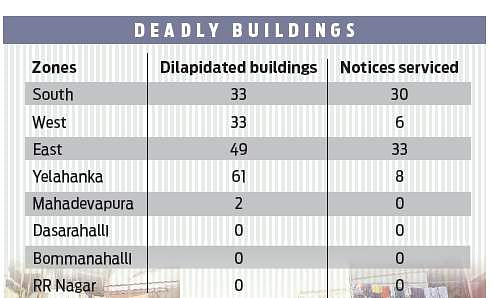 Mapping of the city will begin soon and it will start from highly vulnerable places. One such place is in Subramanyanagar, 2nd Stage Milk Colony in Rajajinagar, said Kumar. Here, one of the building owners was excavating earth near a supporting wall, which collapsed. This led to the weakening of the earth below and the foundation also gave way, making the building weak. The incident happened on Sunday afternoon. Fire and emergency department officials rushed to the spot and evacuated all the dwellers. The site had two buildings on it, each housing four families.

Raghu B V, DMP and liason officer, BBMP Disaster Management Cell, said the area where the incident happened has a lot of elevation. All the buildings are touching each other. He said that while doing the vulnerability mapping, the officials will check the plan sanction, structural and soil stability. For this, the town planning and the engineering section will have to work in tandem.