The foot over bridge proposal at Yeshwanthpur, which connects the railway station and Metro, and has been pending since 2014, could see some concrete action soon.

BENGALURU: The foot over bridge proposal at Yeshwanthpur, which connects the railway station and Metro, and has been pending since 2014, could see some concrete action soon. Last month, an MoU was signed between South Western Railway (SWR) and Bangalore Metro Rail Corporation Limited (BMRCL) to construct a 200-metre skywalk. While the draft has been set, BMRCL is looking at bringing in a design consultant to design the foot over bridge. 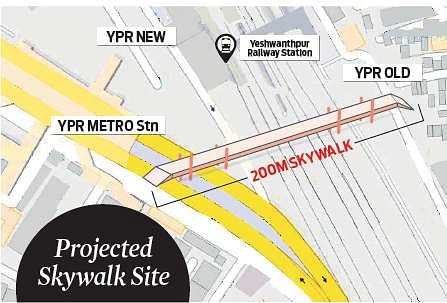 A few citizens and experts said that BMRCL inviting consultants will only stall the project. “This project has passed through several BMRCL MDs. It needs to be done immediately, since travellers are struggling to commute between the station and Metro with luggage. The bridge can help reduce traffic in the area. It is a good project that connects the station to the Metro in five minutes. There is a bus station near the Metro too,” said Sanjeev Dhyamannavar, urban expert. He added that involving consultants may extend the project for 2-3 years.

Rajkumar Dugar, convener for Citizens for Bengaluru, who has been following up on the project closely, said that the FOB is the need of the hour. “This project needs to be pushed. It will bring about a change in traffic and be a huge convenience for commuters,” he said.As of now, travellers from Yeshwanthpur Railway Station have to travel 2.3km by cab or auto to reach the Metro station.

“We have invited a detailed design consultant (DDC) to design the skywalk and will call for tenders after that,” said BL Yashvanth Chavan, BMRCL spokesperson. The project is to be completed within 6-8 months. Since BMRCL is funding the project, MD Director Ajay Seth travelled to Delhi on Monday to sanction funds for the project. The cost is estimated to be around Rs 15 crore, including facilities such as a toilet, CCTV cameras and ticket counter.“We have given BMRCL space to take up work. It is up to them to complete it,” said an SWR official.

Stay up to date on all the latest Bengaluru news with The New Indian Express App. Download now
TAGS
railway station Yeshwanthpur skywalk