Bollywood playback singer Monali Thakur has always believed in raising voice against injustice and says this is the only way to make a country progressive.

BENGALURU: Bollywood playback singer Monali Thakur has always believed in raising voice against injustice and says this is the only way to make a country progressive. Her new video, Khwab Murjha Gaye, which has gone viral on social media, is a testimony to that. The video is about injustice towards women and how they attain justice when abusers are punished.

In town to perform at Forum Mall, Koramangala, on Friday, CE spoke to the singer about her love for music, dance, and acting. Thakur received training in Hindustani classical music for years from Pandit Ajoy Chakraborty. But she always knew what genre of song she wanted to sing in order to make a debut as an independent singer, composer, lyricist and also a performer. Before her debut with the music video, Tamanna, she went through rigorous training under Late Pandit Jagdish Prasad.

When asked about her success in Bollywood, Thakur said, “I worked hard to reach where I am today and continue to do so. It is the only way to attain success. There are no shortcuts.” She shot to fame after Indian Idol 2 and has done playback for Bollywood films such as Race, Golmaal Returns, Golmaal 3, Anjaana Anjaani, Badrinath Ki Dulhania and more. 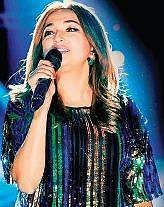 Thakur is also a trained Manipuri and Bharatanatyam dancer and has also acted in movies, short films and TV shows. “I dance for my happiness. I act to let out my emotions. These two forms of art brings all negative energies out. Moreover, they have helped me in my singing career,” she says.

She also became a favourite of many after her acting in Nagesh Kukunoor’s film Lakshmi, whose screenplay revolved around women trafficking. “Lakshmi was special for me. I am very grateful that I could be a part of the story,” Thakur says. Apart from this, she has acted in many Bengali TV soaps.

When it comes to singing, Thakur is particular about the lyrics of the songs she works on. “A song is not just melody. It has a lot to do with emotions and words. Lyrics is the most important element of any song,” she says. Being a judge in several singing reality shows is very encouraging, according to her. “My career started from a reality show, so I have a special connection to them. I learn something from every participant,” Thakur says.

Disclosing her future plans, she says she wishes to work on more solo music videos for her YouTube channel. She adds that though she comes across many unethical people in her profession, the industry has a lot of genuine people too. “It depends which path you wish to travel on.”