BDA has been trying to promote its flats aggressively since August 2017 when it launched an ‘Across the Table’ scheme in order to offer flats instantly to buyers.

BENGALURU:  With hardly any bidders for the tender it had called to finalise marketing agencies to sell its flats in a professional manner, the Bangalore Development Authority (BDA) will now go in for a retendering of the same.

The fresh tender would be tweaked a bit in order to attract interest from agencies.  A total of 1,942 out of 3,235 BDA flats have remained unsold. These comprise 1BHK, 2 BHK and 3 BHK flats. A senior BDA official told The New Indian Express that the BDA had earlier planned to offer a commission to the agencies based on the sale of the flats. 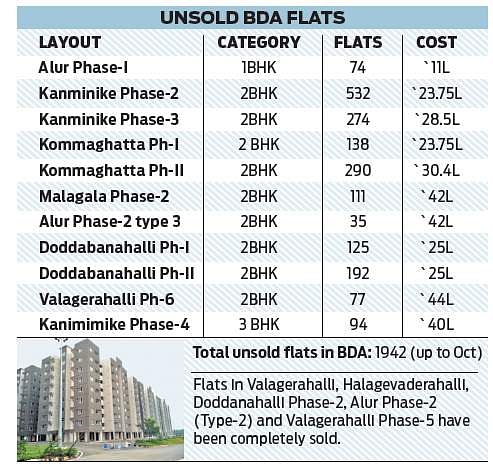 “Though the agencies expressed interest in selling our flats, they were not ready to accept the condition in our tender that their compensation is dependent only on the sale made.

Those who showed interest in tying up with us insisted that a minimum fixed amount be paid apart from the commission proposed,” he said. The hiring of manpower by the agencies and the money invested in promotional activities would involve expense on their part, their representatives contend.

“We have decided to release a second tender for the same shortly. This tender will also provide for a decent sum for these agencies, apart from commission based on the flats sold,” the official added.

BDA has been trying to promote its flats aggressively since August 2017 when it launched an ‘Across the Table’ scheme in order to offer flats instantly to buyers. “The distance factor from the heart of the city is the main reason why people are hesitant to invest in flats in these areas,” another official added.

Now we are on Telegram too. Follow us for updates
TAGS
Bangalore Development Authority bengaluru housing bengaluru flats