‘Farmers should not lose hope or worry about debt’

Karnataka, the sixth largest state by area, stands out on the country’s map for its unique cultural diversity, historical heritage and abundant natural resources.

Karnataka, the sixth largest state by area, stands out on the country’s map for its unique cultural diversity, historical heritage and abundant natural resources. About 78 lakh farmer families and 125 lakh farm labourer families are engaged in agriculture in the state.

Sarvajna, 16th century poet and pragmatist, extolled the virtue of agriculture in three-lined poems called ‘tripadi’. According to Sarvajna, agriculture is the backbone of the country.

Indeed, agriculture is a culture rather than a profession. Though agriculture is hailed as a culture, the sector wasn’t productive enough to fulfil the needs of the nation. Subsequently, the ‘Green Revolution’ was launched, considering that the import of food from foreign countries is not a sign of self-sufficiency. Agriculture, horticulture, animal husbandry, fishing and sericulture were given importance under the programme. Simultaneously, irrigation facilities, power supply and rural banks were set up to cater to the needs of farmers. 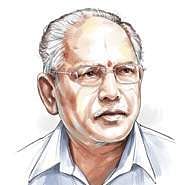 As a result of farmers’ efforts, agriculture has grown beyond self-reliance – to an export-oriented sector. Hence, the Food Security Act was implemented nationwide.
The combined effort of farmers, labourers and agriculture scientists has resulted in growth in production. Overall, India has produced 285 million tonnes of food and 300 million tonnes of vegetables. Growth in food production was possible due to the sheer hard work of farmers. Agriculture has to deal with occupational hazards such as unpredictable rainfall, drought, floods and storms. Despite these challenges, Karnataka is a prosperous state, achieved self-sufficiency in agriculture and food security. Also, supply of adequate raw materials to agro-based enterprises is growing steadily year-on-year, with coordinated efforts of farmers.

If that’s the scenario, why are farmers still struggling? Why are most of them poor after all the hard work? Why are they unable to fulfil the basic needs of their family? Why the suicides? What are their problems? Why are they not commanding a good price for their produce in this modern age?
There are no rules to fix the price of agricultural produce such as corn, ragi, paddy and chickpeas at the primary level, due to an unregulated primary market. At the secondary level, the same products get a price tag. For instance, prices of jowar flour, jowar roti or ragi flour ‘manufactured’ by a factory are determined. Can’t we have the same practice at the primary level?

Why is the balance of commodity exchange, which existed during Independence, missing after nationalisation of banks in 1969? For example, if the cost of products manufactured in factories increased thousands of times, prices of agricultural products have increased only hundredfold. Which means there is no equilibrium in the rise of prices.
From time to time, governments took these issues into account and tried to address prevalent problems with measures such as interest rate waiver, debt relief and Agricultural Mission.

Since 2014, the scope of the five-member Agricultural Price Commission has been widened. A person with experience in agriculture economics and market has been named president. Two members are secretaries of the Department of Agriculture and Cooperation. Besides, two experienced farmers with knowledge in modern farming methods are members of the commission. Director of the Department of Agriculture is the official member secretary of the commission.

The commission envisions maximum share of consumer price, sustainable development in the field of
agriculture, provision of a remunerative price for farm produce and a suitable marketing system.
The commission’s mission is to ensure remunerative price for farm produce, through price and non-price mechanisms, critical marketing interventions during periods of glut, marketing reforms and collective bargaining, improving necessary facilities for the market, stabilisation of market to enhance collective bargaining power of farmers and reach all sections of the farming community.

After our government came to power, senior farmer leader and irrigation expert Hanumanagowda Belagurki was  appointed chairman of the Karnataka Agricultural Pricing Commission. He has been directed to advise solutions for problems with pricing and other issues related to agriculture.
Come what may, the farmer fraternity should not lose hope or worry about debt. I sincerely request farmers not end life in despair. A farmer’s family should get timely assistance.
Against this backdrop, the state government’s goal is to solve distress of the peasantry by promptly implementing farmer schemes and solutions. I want to see my farmers financially secure and the agriculture sector a booming one.

Now we are on Telegram too. Follow us for updates
TAGS
Karnataka farmers