Art of the matter

BENGALURU : Over the last several years, Chennai-based artist Lakshmi Krishnamurthy, an alumnus of the Kalakshetra Foundation, has been focussed on creating awareness on the various Indian art forms with the single minded vision of not relegating them to museum shelves alone. In the city for the opening of her show, ‘Timeless Traditions: Enthralling Indian Art Forms’, at gallery g  over the weekend, Krishnamurthy says, “Indian art may be seen as unique and different from many other parts of the world in the aspect that the technique is subject to little modification and is passed on to the following generations.” She goes on to add that “instant digital art, like instant food, seems to have taken over with non-stop introduction of newer and newer technological innovations.”

Even though she feels Indian art has been pushed back to copy works post Independence, the influence of Bengal school and the works of Abanindranath Tagore, C Sivaramamurthy, Ananda Coomaraswamy and Stella Kramrisch have opened up the understanding of Indian art. “I have been aiming at understanding the fabric of Indian art and constantly evolving works, which capture the energy and vitality of the social fabric of a nation so diverse and rich in heritage,” she says. 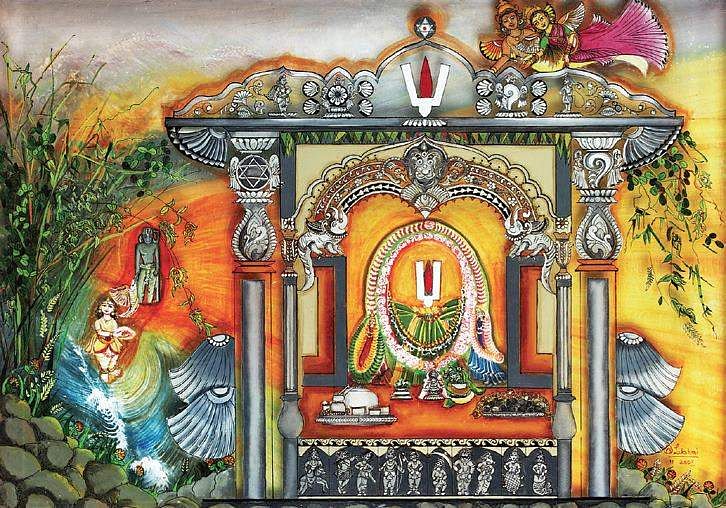 Having been brought up in a little village tucked away within the folds of the ‘granary of the South’ Thanjavur, the “sylvan surroundings and the simple sharing concepts of the agricultural fraternity” influenced Krishnamurthy from an early age. Moved deeply by a historical novel on Raja Raja Chola and the roots of a culture that she was instantly attracted to, the famous South Indian king became her hero and the words of Michelangelo ‘free the figures slumbering in the stone’ her motto.

“I had a yearning for all things traditional, rooted in Agamas (a collection of scriptures of several Hindu devotional schools), iconographic code and art history got me interested in pursuing research in these fields,” says Krishnamurthy, who was also in-charge of the Visual Arts Department, Rukmini Devi College of Fine Arts, Kalakshetra Foundation, Chennai.

At this exhibition, which is on until November 3, some of the techniques Krishnamurthy has explored are Warli, Pithora, Madhubani, Ajanta, true Frescoes, Egg Tempera, Lepakshi, Kerala mural, Thanjavur paintings with real gems, glass, illustrated manuscripts and miniatures. “The works displayed have a cross spectrum of pan-Indian techniques which is best seen through the picture titled ‘Vakrathunda’,” says Krishnamurthy, who feels nature is the best designer to learn from.

The art scene in Bangaluru, she finds, alive and pulsating, especially with the Chitrakala Parishath heralding the renaissance of traditional art forms and the Venkatappa Art Gallery exploring the archives. “The Museum of Modern Art in the Manikyavelu Mansion of yesteryear restored to its glory heralds the travel of tradition to modernity,” she says.