Bengaluru Urban bottom of the heap in using Sakala

To fix this, regional commissioner to review progress every 15 days

Bengaluru Urban district ranks the lowest among the 30 districts in the state, when it comes to using Sakala services. This was announced by Minister for Primary and Secondary Education Suresh Kumar, at a press conference on Monday. The Sakala Act, implemented in 2012, has 1,026 citizen services as of now. However, compared to other districts in the state, its usage is poor.

“Even with BBMP services, implementation is poor. Though each department has informed how many days it takes to implement each service request for a citizen, on the ground it is not followed. For example, if it takes 15 days to complete a service, the application is rejected by the department on the 14th day, citing insufficient information and documents from the applicant,” Kumar said. He added that documents should be verified as soon as the application is received.

In order to fix rejection and delays in Sakala services in Bengaluru Urban, he instructed the  regional commissioner to review progress every 15 days. By November, the district should be brought within the first 10 ranks in use of Sakala. The current rank of other districts in implementing the scheme will also be made public soon, he said.A workshop will be held by October 20 for all urban district officials to train them in proper implementation of Sakala. 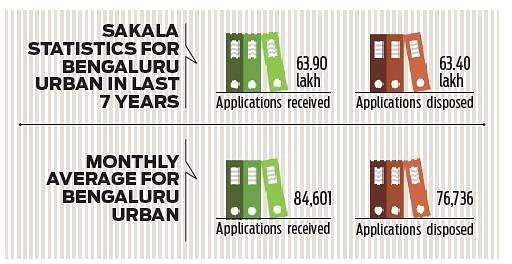 Now we are on Telegram too. Follow us for updates
TAGS
Sakala Bengaluru