We dig into the city’s past to give you a sneak peek into Bengaluru’s homes-turned-boutiques, where heritage meets modernity

BENGALURU: RainTree Boutique, Sankey Road
A hidden gem of the city located in the midst of an extensively lush garden, this store inhabits a sprawling 5,000 sq feet colonial bungalow, which serves as a haven of luxury shopping in the city. Opened in 2004 in the old Bengaluru neighbourhood, the name of the boutique comes from the rain tree which has grown in the lawns for many decades.

The bungalow has a tale of history as it was initially owned by an Irish man and was further passed down to a few Indian families until RainTree was taken under the family of Jaya Pravindra. While RainTree hosts well-known anchor brands such as Anokhi, Christina, Shades of India and Amrapali Silver Jewellery, the boutique also houses a range of seasonal collections which appeal to a variety of tastes. The shopping experience is complete with the quaint Marzipan Cafe located in the verandah of the house, making it the perfect place to relax over a cup of coffee and baked bites such as quiche and pastries. RainTree also houses two exhibition galleries, which, with generous proportions and soaring ceilings make them a natural choice for high-end product promotions and exhibitions. 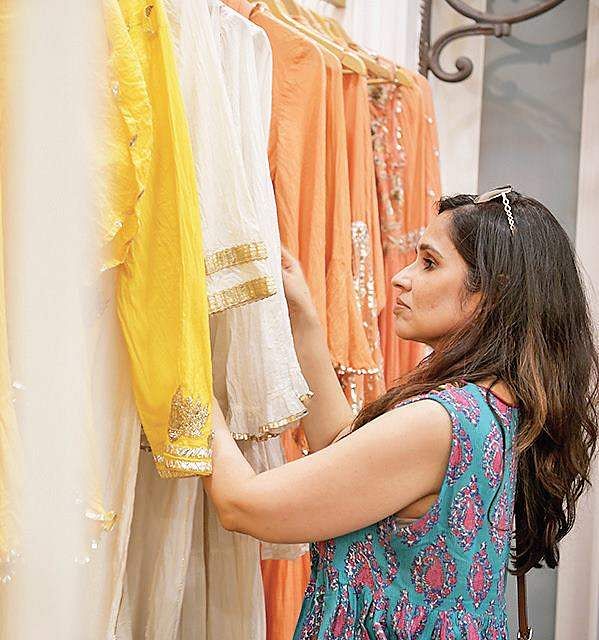 “I have tried to create a space which is seemingly different from the others, where people can visit and indulge in the old-world charm. We aim to provide a very relaxed shopping experience for customers. To enhance the experience, the antique furniture adds to the charm. Even if they don’t want to shop, they can relish a cup of coffee as the history of the entire space contributes to the entire  experience,” says Pravindra.

If you love colonial architecture as much as you love your fashion, you cannot miss Cinnamon on Gangadhar Chetty road. Columned pillars, vintage décor, richly-carved wooden frames are the many things that can just grab your attention. During the time of great famine that struck South India in 1876, the building was set up as an orphanage to help children who lost their families during the calamity. Later, it was used for official purposes, until Radhika Poddar, wife of art collector and philanthropist Abhishek Poddar, discovered it 1999.

Ever since the place has had to go through a lot of restoration. In fact, you will find the blueprint of the original structure and framed pictures of the first residents of the bungalow at the present building.  This high-end lifestyle store houses designer brands such as Payal Khandwala, Almirah, Sacred Lotus and so on.  If shopping is not your idea of fun, then you can just spend time absorbing the beauty of the place, which also houses the Cafe Cassia in its courtyard. Ria Sethi, who was visiting the city and doing some Diwali shopping, said, “The ambience and heritage transports you to a different era. And the brands here are an added bonus.”

Latha Puttanna, Jayanagar
Located in Siddapura,  designer Latha Puttanna’s epynomous brand is housed in a 140-year-old building. Constructed by Kempegowda, who was the then ‘Patel’ (President) of Siddapura in 1880, Puttanna is the fourth-generation owner.  The house has a granite entrance elevation with three beautifully laid out stone, arched windows. This leads to a courtyard with wooden pillars.

Further in, rooms have been restored to suit the sensibilities of Puttanna’s brand, which includes haute couture Indian garments. Right from the arches at the entrance to a grand puja room door, each and every item at the now flagship store has been carefully restored. The house is full of stories and a wealth of the grand heritage that the ‘Siddapur family’ are proud to share.

BasavaKris, Basavanagudi
Located on a main road in south Bengaluru, BasavaKris transports you into another time, another place. The over 100-year-old house-turned-boutique, originally stretched from Kanakpura Road to Church Road, with a huge apple and peach orchard at the rear of the property. The Mahadevan family lived in the main house since it was built by M Mahadevan at the turn of the 19th century. He worked for the Survey of India, mostly posted in Dehradun and Kolkata, so the actual building work was supervised by his wife, Pushpama. A lady of great spirit, she brought up her seven children on this property.

To this day, there’s a warm homely feel that you get upon entering the space which has a mini-nursery at the entrance, an outdoor cafe, and clothes and accessories. They’ve also started music performances every fourth Saturday during which prominent musicians, including veena maestro Jayanthi Kumaresh, have also performed. “More than a retail store, the idea is make it experiential to customers through food, music, apparels and accessories,” says Krishnamurthy R, owner, BasavaKris, formerly Basava Ambara.

Hatworks Boulevard, Cunningham Road
Situated in the heart of the city, Hatworks Boulevard on Cunningham Road lies in lush green premises in a property which dates more than 150 years. It’s an entry into a  whole new world where you will forget the central business district. The property initially belonged to the Maneckjee family, and is now co-owned by their five grandchildren, the eldest being Rishad Minocher. The same premises also housed Imperial Hat Works factory, owned by Nadir Maneckjee, which specialised in making hats for the British armed forces and the Mysuru peta for the maharajas.

Linda Rao, who has been working at the family office for past 43 years, says, “Earlier, this property had a huge driveway, and the main building which is now given out for commercial purpose, had a lovely portico where kids used to play.” The house has gone through multiple renovations and restorations, and the current premises house apparel boutiques, a spa and an art gallery. “The building where Caravan(clothing brand) is, used to be a kitchen once upon a time. So,you can imagine how much has changed here,” she says.

The Bohemian House, Raja Ram Mohan Roy Road
Walking into The Bohemian House (TBH) is like stepping into Bengaluru of yore, thanks to its arch entryways, high pitched roofs and maze like hallways. The more than 70-year-old structure was originally the banquet hall of Woody’s Hotel. According to TBH’s co-founder and creative director Shalini Prasad, the building was in great condition compared to other heritage properties. But a fair amount of work did go in to keeping it intact to introduce a co-working and events space, and a design studio. The dance studio, one of the co-working spaces and a meeting space were, in fact, a store room filled with junk furniture, spider webs and damaged walls.

“There was a lot of wall treatment, roofs, plumbing lines, leakage issues and bugs emerging from the walls. There have been so many scenarios where it’s absolutely time consuming to identify where the rise of the problem was even when the major issues were identified and fixed,” she says. Though challenging, the original structure also came with its own charm. “The good parts are beautiful: Window treatments that we have been able to retain fully, floor tiles that take us back in time and stunning sunlight that filters through. This space is strong, resilient and full of character. It has stood tall and embraced all the years,” adds Prasad.