Halloween is nearly upon us, and many have taken to create a spooky and spiderweb-filled aesthetic to their homes.

BENGALURU: Halloween is nearly upon us, and many have taken to create a spooky and spiderweb-filled aesthetic to their homes. Three party decorators tell CE what they think constitutes the perfect Halloween decor, and share easy DIY decor ideas to make your Halloween party a truly terrifying spectacle. 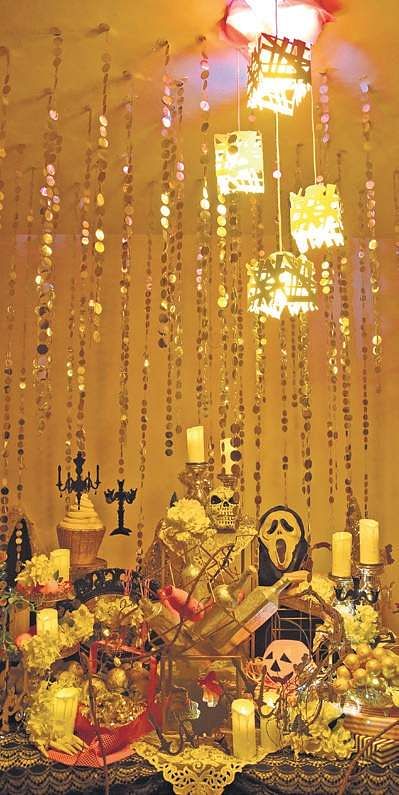 Creep your guests out with a DIY paper mache pumpkin heads and mutilated skulls from Almas’ pick of spooky Halloween decor. She made a curtain of gold coins from a pirate treasure, using golden plastic sheets and some string. Her ensemble is that of a pirate hideout, with golden treasure and the skulls of their enemies.

Method
 Cut coin-sized circles from the golden sheets.
 Staple the circles to the string with an inch’s gap between each circle.
 Make thirteen individual strings with golden coins stapled to them.
 Connect one end of the strings to a dowel. Hang the dowel from the ceiling.

Shamira Fern’s 3D bats give the illusion of movement with their folded wings. Her witch hat string lights took the cake (or should we say, pumpkin) with cutouts of black cats and ravens stuck to a string light that comes out of a witch hat. A spooky warning banner, made with coloured paper and markers, is another easy DIY that she recommends for those in a rush.

Method
 Cut out a palm-sized shape of a bat from the black chart paper.
 Fold the cutout vertically so that the wings lay on top of each other. Open it up and flip the bat over.
 Apply glue to the centre of the fold and stick it to a wall.
 Make at least 12 to form a swarm.

Say boo and scary on

It’s all about the blood, skulls and spiders with Neha. This party decorator has allowed her creativity to run wild this Halloween. Her idea of plastic skulls and balloon spiders will make you want to throw a Halloween bash just for the decorations. Eat off of blood-stained table cloths and cobweb table mats for a spooky touch. Her designs include dry twigs to add a barren aesthetic. She’s even made potion bottles out of mason jars that hold ‘crow spit’ and ‘witch potion’.

Method
 Drape the cheesecloth over the plastic skull or white balloon. If you are using a balloon, you can draw a face on it.
 Hang up the ghost with some string.