BENGALURU: In the midst of the gloom in the aviation industry, Bengaluru has something to cheer about. Kempegowda International Airport (KIA) has emerged as the second busiest airport in the country, a position long held by Mumbai’s Chhatrapati Shivaji Maharaj International Airport, as per latest statistics released by the Airports Authority of India.

Figures for the first quarter of financial year 2020-2021 were made public earlier this week. By recording 4,54,704 international and domestic passengers from April to June 2020, it has beaten Mumbai, which had 3,19,412 passengers in the same period. New Delhi’s Indira Gandhi International Airport had the maximum patronage with 12,31,338 passengers in the same period. All the airports have shown a dip in patronage by 92% to 97%. What’s worse, even Kolkata has gone above Mumbai, thereby pushing it to fourth position (see box).

According to a KIA official, an average of 180 Air Traffic Movements (arrivals and departures) were recorded at Bengaluru in June, compared to nearly 700 ATMs before stoppage of regular flight operations. “As per data (of Aug 6), a total of 91 arrivals and 94 departures occurred at the airport. This included international as well as Vande Bharat Mission flights.” International footfall in the 4.5 lakh figure in Bengaluru stands at 19,427, stats show. 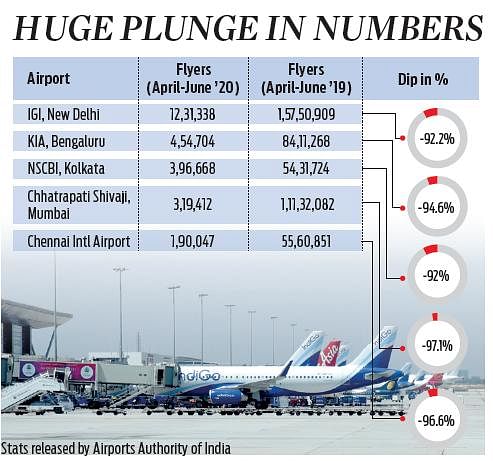 A senior aviation official attributed the dip in performance by Mumbai to far more stringent restrictions in place at the airport there, and reduced number of operations due to Covid-19, rather than any major improvement by other airports. A spokesperson of airport operator Bangalore International Airport Ltd said, “Ever since domestic scheduled operations were allowed by the Centre on May 25, 2020, state governments have had varied approaches to the number of flights allowed in order to manage Covid-19.

That, coupled with local curfews and lockdowns, has led to an alteration in travel patterns. Under the circumstances, it is expected that changes are likely in traditional passenger numbers across airports in India.” On possible policy steps being taken by the government to boost passenger traffic, Director General of Civil Aviation, Arun Kumar, told TNIE, “We have laid down the Standard Operating Protocol. Likelihood of getting infected on board a flight is extremely unlikely, as has been established.”

Some airlines may close down: EXPERT
Aviation expert Captain Mohan Ranganathan spoke about the bleak scenario of the aviation industry right now. “There is no business, family, or tourism travel. Hotels too are shut. Hence, there is no chance that domestic travel will pick up for at least three years,” he said. International travellers contribute to nearly 50% of domestic travel and this segment is now completely closed. “Only those stranded abroad are coming by the few international flights being operated,” he said. By the time, things become normal in the domestic segment, a few airlines would have shut, he added.