When the Bangalore Storytelling Society started a new digital series in March, little did they know that going virtual would soon become the way of life.

BENGALURU: When the Bangalore Storytelling Society started a new digital series in March, little did they know that going virtual would soon become the way of life. In an attempt to promote regional storytelling, they started Stories Sans Borders, where storytellers from different parts of India share tales in their local languages and dialects, exposing audience members to words they have perhaps never heard before. The upcoming edition is slated for Aug. 16 and will have storytellers from the four corners of India, sharing tales in Memoni, Bodo, Punjabi and Kodava Takk.

“Since its inception, these events have been taking place on the third Sunday of every month. So when this month’s edition was slotted for a day after Independence Day, we made a conscious decision to include tellers from the length and breadth of India,” says Vikram Sridhar, a professional storyteller himself. He, along with other professional storytellers Aparna Athreya, Aparna Jaishankar, Lavanya Prasad, Shylaja Sampath and Sowmya Srinivasan form the core team of the group. “We hope the event gives a platform to all languages in India, where they can be spoken and shared with people who don’t belong to their state alone,” says Athreya. 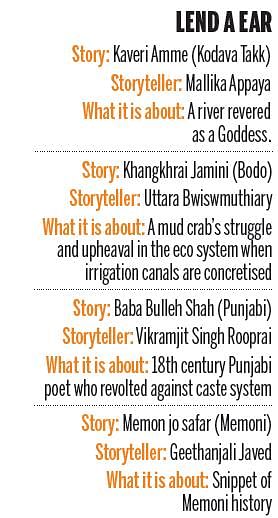 The idea came from the realisation that even when the source of a story lies in a regional language, it was being delivered only in English, leading to a loss in translation. The members then conducted their first such event in March, on World Storytelling Day. Since then, the monthly initiative has covered more than 20 languages and dialects, including Awadhi, Bangla, Dharwad Kannada, Gujarati, Hindi, Kannada, Khasi, Konkani, Maithili, Malayalam, Marathi, Marwari, Nepali, Odia, Parsi Gujarati, Punjabi, Sindhi, Tamil, Telugu, Tulu and Urdu.

The August event will have story-telling in Punjabi by educator and heritage activist Vikramjit Singh Rooprai and in Bodo by educator and writer Uttara Bwiswmuthiary. The lineup also includes a story in Kodava Takk by montessori teacher Mallika Appaya and a Memoni tale by storyteller Geethanjali Javed. Members of the storytelling society rely on their network to find regional language storytellers and often start planning events months in advance. For the August edition, they began in May, with work currently going on for their October event. “Since this was meant to be a space for languages and stories, we knew we had to go digital from the beginning. It was the only way we could reach out to storytellers from across the country,” explains Jaishankar.

Storytellers are given a few guidelines: They have to bring out tales in their languages and maintain all the nuances without anglicising any element. The storyteller first gives the listeners a gist of the story in English. “They then share the tale in their language. And even if an audience member doesn’t know the language, they will be able to understand the nuances or follow the story through the pace, tension or other devices the storyteller uses,” she adds.

At the end, a small interaction session with the storyteller explores the source of the story, why it was chosen, and other points about the language or how the dialect emerged. “The diversity in languages, accents and words helps us feel a little more connected -- to our country and who we are as Indians,” says Athreya. The event will take place on Aug. 16, 11am. Registration is mandatory. Write to bangalorestorytellingsociety@gmail.com for details.