“The documentary is as much a story about Blossom as its founder, Mayi Gowda,” says Sriram Sabhapathy, founder of LastBench Studio and director of the documentary.

BENGALURU: There’s hardly a Bengalurean bibliophile who doesn’t love Blossom Book House. Here’s something interesting all fans and lovers of the store will like: A city-based creative studio has come up with a short documentary on Blossom.

The four-part series uncovers the journey of this city’s bookstore through stories from its owner, his childhood friends, family, regular visitors and Bengaluru’s literati, including Ramachandra Guha and Shoba Narayan.

“The documentary is as much a story about Blossom as its founder, Mayi Gowda,” says Sriram Sabhapathy, founder of LastBench Studio and director of the documentary.  The first part of the series – released on Saturday – looks at Gowda’s journey from a village near Rangasamudra, Karnataka, to Bengaluru. The 10-minute episode has the bookseller recalling how he ran away to Bengaluru with `60 in his pocket after his SSLC exams, all in search of work. 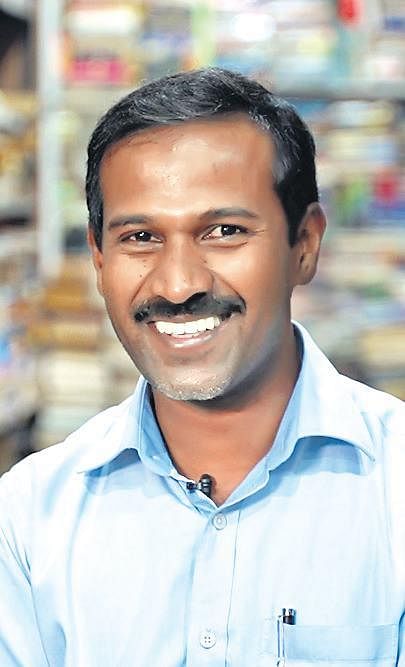 Homesick and scared, he returned home only to return to UVCE to pursue engineering. It was here that the story of Blossom began, although not in the form of the store that is beloved today. “I still remember he coming every day to college with red eyes only to know that he was running a shop on the pavement besides Barton Centre on MG Road selling old books,” says Gowda’s friend Kumaresh VS in the video, which is out on LastBench Studio’s YouTube channel.

The shooting began in September, with Sabhapathy’s team – including Nikhil Suresh, Raaj Rufaro and Shashank Ganesh – spending 5-6 weeks at the store, gathering stories from its regular visitors. “We spent so long at the store that eventually a comfortable relationship was able to blossom between Gowda’s team and us,” says Sabhapathy, adding, “You know how Mayi Gowda never interferes with someone’s book buying experience? Our filming process was just as smooth.” The bookseller, who truly is a man of few words, was all smiles after watching the first part of the series.

He tells CE, “I like how the documentary turned out, the team has put in a lot of effort, and they even reached out to my friends and authors.” It is this equation that the city shares with the bookstore and its owner that the documentary captures through bytes shared by Guha and Narayan. “We thought it would be difficult to schedule an interview with them but surprisingly, both the writers agreed within a day and were excited to talk about their memories of Blossom,” says Sabhapathy.

From planning to execution, it took the team a total of five months and counting to make this documentary. The story, however, doesn’t end here. Three more parts – about how Blossom was set up, its evolution, and its resilience during the era of online shopping, e-books and now, the pandemic – are in the pipeline, with the series culminating on Dec. 23.

Booking the journey
Mayi Gowda used to sell books on the pavement while studying engineering at UVCE. He sold books till 7-8pm before studying at night. Through campus placements, Gowda earned a job with an American multinational firm. Within two weeks, Gowda gave up the position to fulfil his calling to sell books. The store houses a collection of over 2 lakh books in both its branches.

Take a tour of the journey of Blossom Book House with this  film made by a B’luru creative studio that narrates stories from its owner, his childhood friends, family, regular visitors and the city’s literati

Now we are on Telegram too. Follow us for updates
TAGS
Ramachandra Guha Blossom Book House