Fresh off the feat of winning a UN contest, Shravan Regret Iyer is happy his pic will be used to address climate change

BENGALURU: Awards are not new to filmmaker and photographer Shravan Regret Iyer. But his most recent win, the United Nation’s World Meteorological Organisation (WMO) 2021 award, is something special for him. Iyer, a former journalist and a documentary filmmaker from Bengaluru, captured a dramatic weather event in Morondava in Madagascar. “I took this photograph in the island nation of Madagascar in Africa during the rainy season.

It should be noted that Madagascar is witnessing erratic weather conditions, where they are experiencing large fluctuation in rainfall patterns and increased temperatures in the last few years. This has an adverse impact on people and their livelihood,” says the 30-year-old.

The photograph has been shortlisted for WMO’s 2021 Calendar Competition, which received more than 1,100 photographs from all over the world on the theme Weather, Climate, Water and the Ocean. A jury selected 13 winners, including Iyer.

The Bengalurean is currently bringing his experience from Asia, Africa and North America to his doctoral studies in media at Rutgers University in New Jersey. 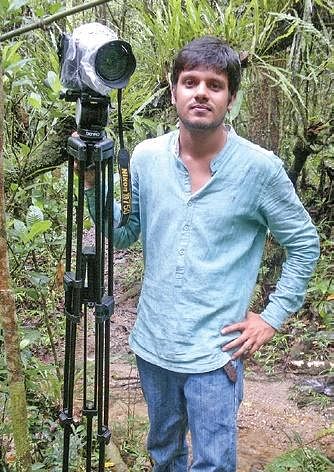 His father Regret Iyer, a lensman and media person too, trained him at a young age to see and capture human interest stories. “In the last 15 years — ever since my very first photograph was published in a newspaper — I have been lucky enough to have travelled to some remote corners of the world and document intriguing stories,” he says.

This chance to be featured in the WMO platform where photographers from around the world are showcasing images of dramatic climatic conditions is an honour, he adds. “The photograph will also be featured in multiple UN platforms to help address climate change.”

There’s been much uncertainty and unrest with the pandemic raging through the year. While Iyer agrees, he tells CE, “Though there is restricted travel, I have continued to seek joy and solace from nature here in New Jersey. I have also tried to film a short series, ‘Humor in Nature’, during this pandemic,” says Iyer.

Now we are on Telegram too. Follow us for updates
TAGS
Shravan Regret Iyer World Meteorological Organisation UN award