Tune into the past with retro radio Collector

Uday Kalburgi restores old sets too; he has over 80 vintage radios in his workshop in Bengaluru

BENGALURU: Do you have an old radio?’ is the first thing that Uday Kalburgi asks whenever he visits someone’s house.As you enter the room on the ground floor of his three-storey building at KHB colony in Basaveshwaranagar, you will see a 55-year-old man replacing the capacitors of a vintage radio. A slight turn towards the right side of the room gives you a glimpse of an extraordinary collection of vintage valve radios.

Meet Uday Kalburgi, a radiophile, embraced the art of radio restoration, and has a collection of over 80 vintage radio sets of different models and an era at his workshop in Bengaluru.Born and brought up in North Karnataka, from childhood, Uday was curious about technical things. Calling bells, coils and radios always fascinated him. In 1973, Uday who was then studying in 4th standard, went for summer vacation to his grandparents’ house in Ballari and a servant there, who had sound knowledge on radios, taught him about crystal radios. This inspired him to do his own mini radio called - ‘Matchbox radio’. After this, he was bitten by the radio bug and he has never looked back. 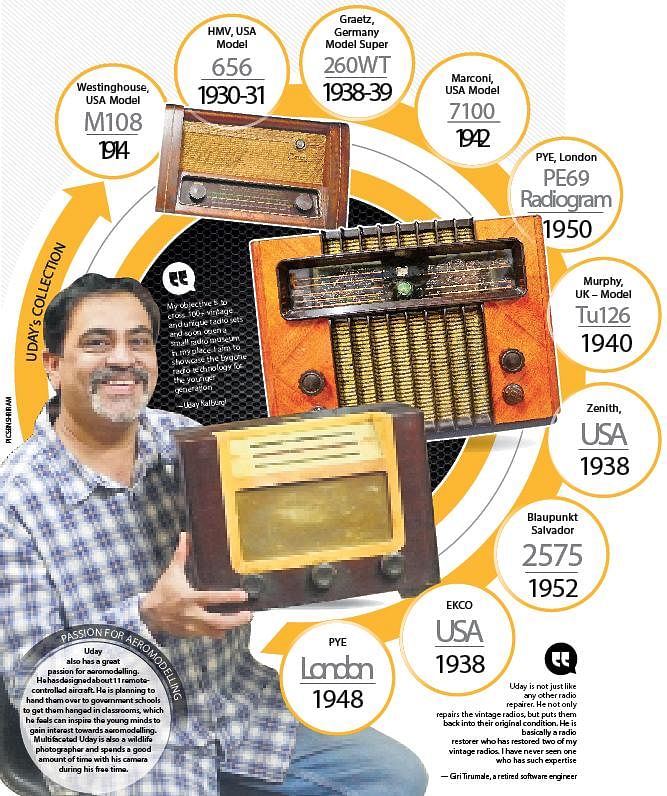 During his school days in Nippani near Belagavi, he used to stop in front of radio repair shops and stand for hours, just to see how they repair the radios. “Initially the radio repairers objected but seeing my interest they allowed me and explained more about valve radios,” says Uday.By the time Uday reached tenth standard, his experiments with radios and technical things had helped him gain more interest in the science field. Considering his unique experiments and traits, he was selected for the National Science Talent and Exhibition held in New Delhi in 1980, where he received the young scientist award from the then Prime Minister Indira Gandhi for his project on Rubberband motor.

He attributes his success in learning technical things to his father’s colleague Prof. P S N Reddy, who encouraged him a lot, to think differently, which Uday feels drove him to choose the field of radio restoration.Uday later completed his PUC and did his Electronics and Telecommunication Engineering in BVB Engineering College. He worked for a few years at HCL Computers before moving to Bengaluru to join a French MNC - Alcatel Telecom -- in 1994, where he worked as Service engineer and left the job in 2014 when he was Vice President – Sales Initiative.

Through his journey of collecting radios right from childhood, he kept his passion alive during his professional life too. “People have different hobbies, but from childhood, radios have been my first love. Initially, I used to collect radios from my father’s friends. They used to give it for repair, but with the TV hitting the market, many gave their sets to me,” he says.His job in a French MNC helped Uday to visit different places and countries. During his visits, he made new friends, who extended their support in his endeavour of collecting vintage radios.

Currently he has some rare and special edition vintage radio models including Westinghouse M108 of 1914, a HMV-model 656 of 1930, Graetz, a Germany Model Super 260WT along with radio sets like Marconi and many local-made sets like Ramco, UMS and National Ekco.In the digital age, where people are shifting to portable devices feeling that small is beautiful, Uday has not only collected many heavy vintage radio models, but has also restored them to their original condition.

Initially, he just repaired the radios and never imagined that he could some day take up restoration work. It was in 2001 when he went to France for a meeting that he met Alex in Brest, France, who inspired him to start collecting vintage radios and suggested to him not to just repair them but restore them too. Inspired by his words, Uday began his radio restoration work.“Radio restoration was challenging as I needed to look for original parts all over the world. This restoration process is of electronics, dial glass, all parts and cabinets,” says Uday, who takes nearly one to two months to restore a radio.He attributes his success to Pandu Rajan, a retired engineer, whom Uday considers as his mentor and guru. Pandu Rajan, who restores Philips radios, guides Uday whenever he faces a hitch.

Uday collects vintage radios from the scrap market or through friends and from online portals. Whenever he gets to know there is a vintage radio (working or not working) with them, he would  visit the place and purchase it.“There are also a few scrap dealers who would call me up and say they have got an old radio with them. I ask them to share a few details and collect them by paying a certain amount,” says Uday.

Putting up the photos of Thomas Edison, Gerard Philips, Nikola Tesla and Pandu Rajan (his mentor) at a room in his building, Uday has created an exclusive radio workshop, where he spends most of his time.
One could see neatly arranged hand tools, flat blades, nut drivers, wire cutters along with some testing equipment, schematic diagrams, worksheets and carpentry tools, that are used to restore the radios.Whenever he starts restoring a radio, the first thing he does is search on the web about the radio model and try to track its history. He then draws a schematic diagram of the radio, identifies the components, clicks the photographs of them in his DSLR. He then tests the set and applies certain electronic rules to find the issue with the set. He replaces the capacitors if needed and restores them.

If he needs to replace the valves or any components, he gets them from Spain, Germany and other countries. Having learnt carpentry work, Uday himself does the painting, polishing and wood work. Once they are restored, the radio sets are kept in the rack set up at his workshop.

“I am lucky enough to have acquired these prized possessions and also love to restore them. Earlier, the valve radios were a prestige item in households. They were expensive and very rare in society. From listening to classical music to news over AIR, light music, cricket commentary, people used to depend on radios. But with the advent of technology, the demand for radios dropped drastically and the number of radio stations in the world which was 27,000+ in 1940-56 reduced,” says Uday, who has a dream to set up an exclusive museum in his place to showcase the bygone radio technology for the coming generations.Despite living in a digital world, Uday, as a vintage radio crusader, wants to tell the younger generation about the indispensable role that radio played in the lives of many.