Veeranapalya flyover gets a wild makeover

This is a crucial junction near the Manyata Tech Park and thousands of people cross it every day.

BENGALURU: BBMP’s Adopt a Flyover programme received a major fillip with the launch of Wild Arena — a wildlife-themed public space under the flyover at Veeranapalya, Outer Ring Rd, near Manyata Tech Park. It has been conceived and implemented as a CSR Initiative by L&T Technology Services (LTTS), in association with India Rising Trust and Bruhat Bengaluru Mahanagara Palike (BBMP). 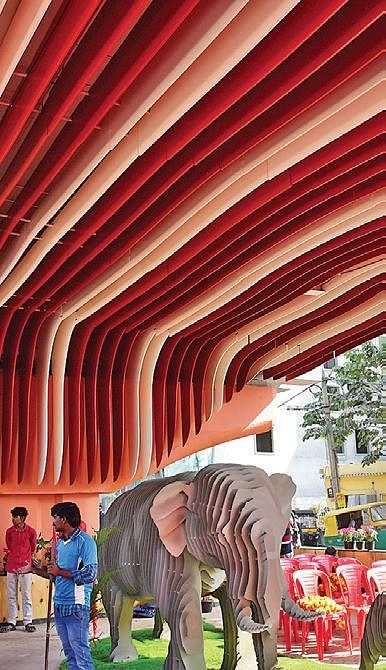 This is a crucial junction near the Manyata Tech Park and thousands of people cross it every day. As part of Phase 1 of the adoption, the entire area was converted into a neat, clean, green, and managed public space to enhance the hygiene and aesthetics of the entire area, in December 2018, and has been maintained since then. As part of Phase 2, it was recreated to celebrate the rich biodiversity and wildlife of Karnataka. The project was inspired by the documentary Wild Karnataka and launched by Karnataka Forest Department.

About 200 volunteers were involved in recreating the space. Dynamic animal sculptures were designed for people to watch. Further, recycled products were used to make the wild paver blocks, kerb stones and grills have been ‘recycled’ from other parts of Bengaluru where roads were white-topped or repaved. Materials from footpaths on Cubbon Road, Palace Road and Vijayanagar have been recycled and reused to reduce the carbon footprint of this project, and keep tons of materials away from landfills or lakes. Minimal landscaping was done to reduce use of water.

A volunteer from The Ugly Indian said,”We should not just stop at cleaning but even beautify it and also send send a message to the public. We have used tigers and elephants as these are important animals, especially in Karnataka.”BBMP Commissioner B H Anil Kumar said, “For the first time, the space under a flyover has been beautified with a wildlife theme. Most of the things are made with recyclable products.”