BENGALURU: For Kiran Natrajan, the old era of Bengaluru is a time he always wants to visit. His collection of photos, however, is like a time machine that teleports him there in no time. Some of these pictures of old Bengaluru from his private collection are currently on display at the ongoing Whitefield Art Collective in VR Mall. In collaboration with Artflute, which is named Reimagine Bengaluru, the collection comes with the idea of juxtaposing the old images with that of the same locales in the modern era, shot by contemporary photographers PeeVee and Amith Nag. 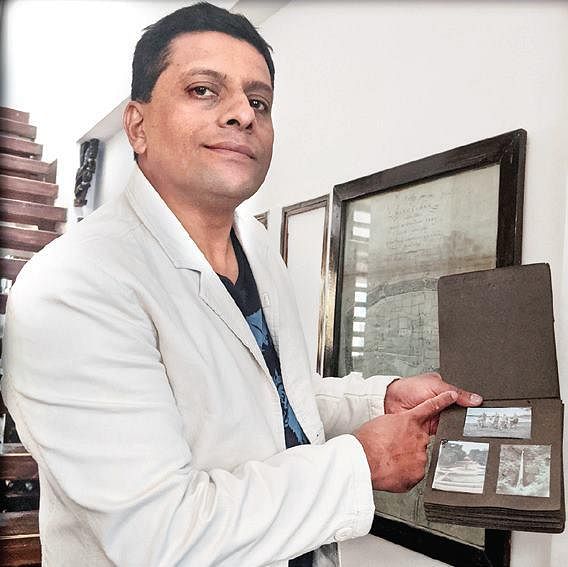 All the images in Natrajan’s collection come with a story behind it. “In 2014, a few of my cousins visited a vintage market in London and they discovered an album, which was filled with pictures of old Bengaluru. Everyone who knows me knows about my passion towards anything related to the bygone era of Bengaluru,” the software professional says, adding, “They asked me if I will be interested. There was no reason for me to say no. They immediately picked it up for me before coming back to India.” According to Natrajan, it was nothing less than a treasure.

Being a man of curiosity, Natrajan had to discover the story behind the album and whom it belonged to. And going by the signature and details on it, the pictures were clicked by Lance Corp T E Dew in 1916. Dew belonged to the first Brecknockshire Regiment that arrived in Bengaluru for a course in Army Signaling and Telephony. He was part of a group of about 20, and soon became good friends with two colleagues, presumably from the same regiment. The trio used to go out on bicycles almost every weekend, covering roughly 10-15 km radius around the Ulsoor zone.

Dew, being an amateur photographer, took photos of all the places they visited, and by the end of their stay in December 1917, it was a set of about 200 photos. “We do not know much about the trio after they completed their course in 1917, but almost a hundred years later in 2014, Dew’s photo album was found during a house clearance in the UK. Later, it made its way to an ephemera fair in London,” says Natrajan.

The history enthusiast also mentions that the pictures are completely amateur, which is what makes them rare. “We are talking about a time when candid or amateur photography was not in trend. It was just three boys exploring a city by capturing it on the lens.” He did pick one of his favourites though. “In one of the pictures, a llama is seen at Cubbon Park. In today’s day and age, that’s impossible,” he adds.
Ask him more about his collection and he says, “I have something planned about what to do with my collection. I will disclose it when the time is right.” But for now ,he is happy living in the bygone era through his collection.The collection will be on display till March 3 at the Whitefield Art Collective, VR Mall, Whitefield.