Lalbagh show to pay tribute to Vivekananda’s life and times

The theme chosen by the Horticulture Department is Viveka Pushpa Pradarshana- 2020, commemorating the 157th birth anniversary of the Hindu monk.

BENGALURU: The 211th Lalbagh flower show, being held January 17- 26, is dedicated to Swami Vivekananda, with his Chicago speech as the highlight, along with the Vivekananda Rock Memorial in Kanyakumari.

The theme chosen by the Horticulture Department is Viveka Pushpa Pradarshana- 2020, commemorating the 157th birth anniversary of the Hindu monk.

This is not the first time the department has dedicated the show to eminent personalities, with Mahatma Gandhi, Kuvempu and Jayachamarajendra Wadiyar being highlighted at earlier editions of the show. B Venkatesh, director, Horticulture Department, said a total of 19 sub-themes will be showcased this year.
M Jagadeesh, joint director, Horticulture, Parks and Gardens, told The New Indian Express that two screens will be put up around the glasshouse, where a documentary will be screened to showcase Vivekananda’s history and contributions.

A cartoon gallery showcasing his life will also be set up. Around five lakh booklets on his life are being printed by the information department  for visitors. Songs on Vivekananda, Kuvempu and Shivarudrappa will also be played.

A total of 92 varieties of flowers will be on display, procured from ten countries, including Brazil, Thailand and Argentina. Inputs from Ramakrishna Mutt, Basavanagudi; Ramakrishna Ashram, Mysuru and Belur Mutt, Kolkota, are being used for the show. Also, 1,008 sayings of Vivekanada will be worn as badges by children. A drawing competition for students will be held, with 800 students participating. 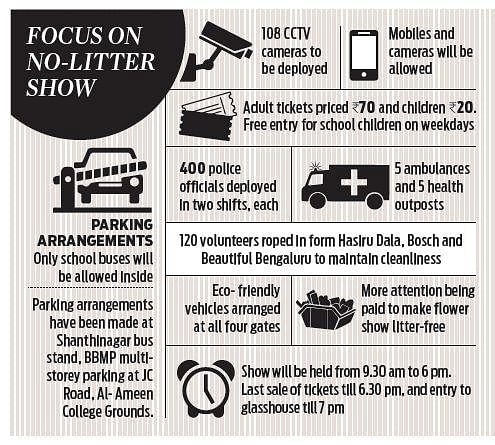