Penning a book on ‘corruption dharma’

Over the course of her life, Rao has served in multiple capacities for both the Government of Karnataka and India.

BENGALURU: Though a retired Indian Administrative Services officer, Veena S Rao’s life is far from idle. After a book called Charlotte’s End, which was inspired by Daphne du Maurier’s Rebecca, and a play, The Tales of Quarles, the Prince who Fails, her new work of fiction looks at how scams happen in the government. Titled The Asuras of Antariksh, the story looks at a deal that a government agency strikes for building a satellite and leasing it out to a foreign company. The deal passes on to the succeeding government, but gets cancelled once a scandal erupts.

“We keep hearing complaints about corruption both inside and outside of government; we keep reading about all kinds of scams in the newspapers, about CBI enquiries etc, but no one has documented its actual operation either in non-fiction or in fiction,” says Rao, while speaking of the book that released in July last year. “So I said, why not write a story. The novel, in a sense, charts out the principles of ‘corruption dharma’ and the consequences of betrayal.” 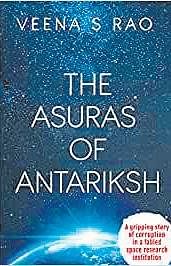 Over the course of her life, Rao has served in multiple capacities for both the Government of Karnataka and India. This led to instances of watching, not only from the sidelines but also from within the government, of many “intriguing, interesting, questionable and commendable” actions from both the government and individuals and agencies dealing with them. This huge repository of information eventually became the trigger for the book, which Rao describes as, “An intelligent imagination of an insider within the government to try and piece together various fragments of information that is available within the public domain.”

The writing process for this book began in 2015, with Rao mainly dedicating her day hours to her work on addressing India’s malnutrition issue. “As I grow older, I’ve been writing later and later into the night,” she says, adding that this book has no expression of any ideas or thinking from the characters’. “It’s just a succession of events. There’s no philosophy, right and wrong or good and bad. Let the reader decide that,” she explains.

This “sarkaari story” then strays far away from the genres Rao previously explored, one being an English country novel and the other a Shakespearean play. But ask her to pick one that was her favourite to write and Rao firmly states with a laugh, “I can’t choose. It’s unfair.” Her first book came out in 2016, post her retirement from the IAS in 2009 “I always knew I wanted to write, I just had to find the right time,” says the 70-year-old, whose next book will be on malnutrition and finding a solution to it.

Karnataka,over the years
While her family hails from Muzaffarabad in J&K, Rao spent her childhood in different schools, includingin Dalhousie, Jabalpur and Nainital. But despite all the moving around, Bengaluru qualifies as home for this writer, with her having spent close to 38 years here. She joined the Karnataka cadre in 1972 and has seen the state change immensely since then. “North Karnataka is much better but overall development levels are still lower than South Karnataka,” she says, adding that special interventions would be required to bridge this gap.  “We need to invest on human development. Besides this, we also need to invest in effective services to improve their indicators within a short time, say one generation.”