A wake-up call for managing Covid

Bhagat, along with five other students, form the core team of the community that in just two months grew from six to over 1,000 members.

BENGALURU: Just as Bengalureans were coming to terms with the news of the cases rising rapidly in the city, came the heart-wrenching updates of patients losing their lives due to unavailability of beds in care centres. But instead of just rueing the sad state of affairs, this group of youngsters decided to make matters better. The team behind Bangalore Student Community raised close to `3.8 lakh and donated 536 beds to a Covid care centre at College of Horticulture, UHS Campus. “The more the number of beds, the higher the chances of a life being saved. We didn’t want anyone else to go through what the patients who couldn’t find vacant beds had to face,” says Dev Bhagat, a student at St Joseph’s College of Commerce.

Bhagat, along with five other students, form the core team of the community that in just two months grew from six to over 1,000 members. Though initially sceptical about the task at hand, the team managed to crowdfund the required money in four days – a response that left the students feeling overwhelmed. Trishank Batavia, 21, who is also a part of the core team, says, “I was delighted to learn that there are people out there always willing to lend a hand.” 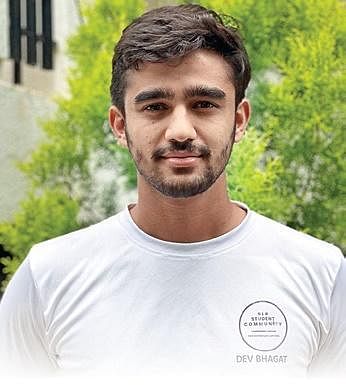 Once they decided to pitch in, the team reached out to BBMP officials who helped them identify a centre in need and the requirements of the mattresses they would have to procure. Syed Junaid, a student who is part of the community’s on-ground team, was present at the centre to ensure the delivery and set-up of the beds. “Since this centre was still being set up there were no patients yet. But due to the rise in number of cases, I am trying to reduce my on-ground presence at the moment,” he says.

This isn’t the first time the students have come together to help out. Since the formation of the community, they have been involved in various initiatives: Providing migrants leaving the city with food, water and other essentials; distributing ration and PPE kits to security guards of government hospitals; holding online awareness campaigns; and submitting papers to the education ministry about issues faced by students during exams. “One of the main aims of starting this community is to amplify the voice of students. They now know there is someone they can reach out to with their grievances,” says Bhagat.

Agrees Junaid, who says nothing compares to the satisfaction he receives from helping others. During the migrant exodus, he was able to help 27 labourers from Assam find temporary shelter in the city, until they boarded their train to return home. He says, “That was one of the most fulfilling days for me. Instances like this helped me get closer to the real purpose of my life.”