On the cards: Matter of identity

This is one of the most thematic games that’s come out recently, because the theme is baked into every aspect of the game.

BENGALURU: Fantasy Flight Games has made a name for itself with its line of Living Card Games – games that evolve over the course of time with the release of campaign expansions and card packs. Starting with the Lord of the Rings LCG and, more recently, the excellent Arkham Horror LCG, they’ve consistently put out compelling games with this framework. Today, we’re talking about their latest twist on the genre – Marvel Champions.

Released in 2019, Marvel Champions is a fully cooperative card game where 1-4 players team up as Marvel superheroes in order to defeat a villain and counter any schemes he might be trying to pull along the way. You lose if the villain manages to bring his schemes to fruition or if all players are defeated, and you win if you manage to take down the villain across a series of stages. You see, as each game goes on, the villains change their tactics in various ways -- Rhino gets angrier and starts hitting harder, for example, while Ultron starts amassing an armada of drones to defend him. Adding more variability is the modular encounter deck system which is utilised in every game; for example, Rhino might be planning to set off a bomb in one encounter, whereas Klaw might be backed up by legions of Hydra minions in another. 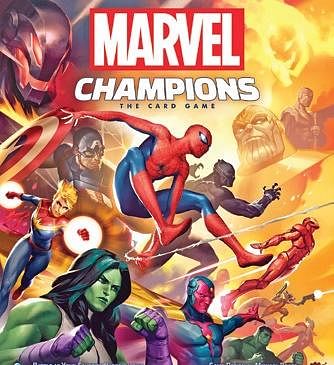 Enough about the villains, though -- we’re all here for the heroes, right? The base game of Marvel Champions offers five heroes -- Black Panther, Captain Marvel, Iron Man, She-Hulk and Spider-Man -- and each plays differently, as you might imagine. There are a lot of things to admire about Marvel Champions, but the cleverest mechanic in this box is how it handles player identities. Here’s how it works –each player starts the game in alter-ego mode, where your character is currently in their ‘civilian’ persona (Peter Parker, for example, or Carol Danvers).

That’s all well and good, but you can’t actually go on the offence against the villain until you flip your identity card to its hero side. The problem is that, once you’ve done that, the villain becomes aware of you and starts coming after you; Rhino doesn’t know or care about Peter Parker, but he’s definitely not a fan of Spider-Man.

Eventually you’re going to take enough hits that you need to flip back to your alter-ego side and recuperate a bit, but that’s when villains take advantage of your absence in order to scheme and advance their plots. It’s a razor-sharp system and a beautiful tightrope to walk -- should you stay in hero form a little longer even though you’re already battered, or should you take the chance to heal up a little and hope that the villain doesn’t take too much advantage of the breather?

This is one of the most thematic games that’s come out recently, because the theme is baked into every aspect of the game. For example, Iron Man starts the game with a hand size of 1 (while Tony Stark has 6) and the only way to boost that is by deploying more tech upgrades to his suit over the course of the game. Captain Marvel specialises in massive bursts of damage, as you’d expect, and meanwhile each villain feels unique as well.

Marvel Champions is a phenomenal game. Having been warmly received, it’s got a steady flow of expansion card packs that add new heroes (Captain America is particularly fun!), villains and scenarios to play through. It can be a little convoluted to work your way through the flow of the game the first time you play, but it is worth the effort.