Two students and a podcast

These days, Om Nakshatra Bhardwaj has more to look forward to after his daily online classes.

BENGALURU:  These days, Om Nakshatra Bhardwaj has more to look forward to after his daily online classes. Thanks to a podcast started by him and fellow student Samit Lambu, the 17-year-old spends the hours after virtual classes either editing an episode or conducting research for an upcoming one. Called Gravity Podcast, it was started with an aim to motivate others, especially those with a specific talent who were unsure about where to begin. 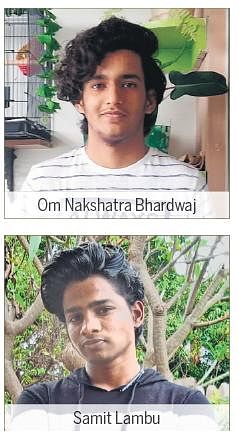 “We speak to professionals from different fields, like food, photography, and entrepreneurship, to get inputs about life in their respective sectors. Now, instead of spending time scrolling through social media, I prepare for more episodes,” says Lambu, who like Bhardwaj, is a commerce student at Deeksha, Kanakpura.

“One of our guests is Anand Raja, the founder of zero-waste juice shop, Eat Raja. So those aspiring to enter food business could get inspired and use similar concepts to reduce waste,” says Lambu. While he and Bhardwaj co-host the show, editing is done by Sai Samarth, a student of Sri Chaitanya School. They also make sure to incorporate a segment on mental health in the show. Questions to guests usually involve how their venture has been affected by the pandemic and how they deal with it. “We talk so much about the need to be physically healthy. We need to do the same for mental health too, especially right now,” says Nakshatra.

While they aim to inspire others, the process is not devoid of learning for them either. Lambu, for instance, has realised that being extroverted leads to more opportunities. “Talking to different people changes the way you think. I’ve learned that the trick to get people to open up is to make them forget that the conversation is being recorded,” he says. Agrees Bhardwaj, who adds, “I’ve got better at editing, and there’s so much to learn with the research that goes into an episode. I am happy I have something to keep
me occupied.”

Now we are on Telegram too. Follow us for updates
TAGS
podcast