On June 2, Karnataka Institute of Medical Sciences in Hubballi had said they successfully treated a 65-year-old with plasma therapy.

BENGALURU: Yet another case of a Covid-19 patient passing away despite being administered plasma therapy, was reported from Victoria Hospital.“The 58-year-old male was admitted with severe Acute Respiratory Distress Syndrome (ARDS), was on high-flow nasal cannula (HFNC), and then on non-invasive ventilation. He received plasma on the seventh day of admission, was intubated but passed away the day after plasma administration,” said BMCRI director-cum-dean Dr. CR Jayanthi.

This is the second such death of a corona patient who received plasma therapy. The first was a 60-year-old male who died on May 14; he also suffered from pneumonia, hypertension, and diabetes. Dr. Vishal Rao, oncosurgeon and member of the Covid consultative group said, “The second patient also had uncontrolled diabetes and hypertension, and was critically ill. It is very difficult to save a patient with such comorbidities. Plasma therapy is not yet proven to be a Covid cure.”

So far, five patients have been administered plasma therapy at Victoria Hospital, of whom two have passed away. One patient recovered and was discharged, and two patients are still under treatment. Of these, the first had severe ARDS, received plasma on the fourth day of admission, is on high-flow nasal oxygen, and is showing improvement. The second one, too, suffered severe ARDS and was started on intermittent continuous positive airway pressure therapy and HFNC, received plasma on the third day of admission, and is showing improvement. On June 2, Karnataka Institute of Medical Sciences in Hubballi had said they successfully treated a 65-year-old with plasma therapy.

Among 213 new cases of coronavirus, 23 were contacts of one superspreader from Dharwad, a 59-year-old male who had earlier tested positive and spread the virus to three other people.As the tally touched 7,213, two more deaths were reported, taking the toll to 88. In Dakshina Kannada, 22 UAE returnees tested positive, and 85 Maharashtra returnees tested positive across the state on Monday. Kalaburagi saw the highest number of 48 patients. Bengaluru Urban followed with 35 cases. 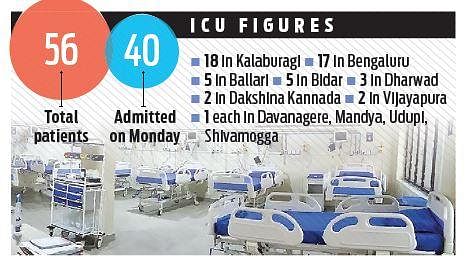 Now we are on Telegram too. Follow us for updates
TAGS
Plasma therapy COVID-19