BENGALURU: In times of difficulties, sometimes the biggest support can come from a like-minded stranger. Members of the artist fraternity are now coming together to help one another out. A support initiative called Art Chain  India seems to be picking up pace among visual artists in India, trickling down to Bengaluru as well. Here, an artist puts up their artwork for sale on social media and then pledge to buy a work by another artist once they reach ` Rs 50,000. 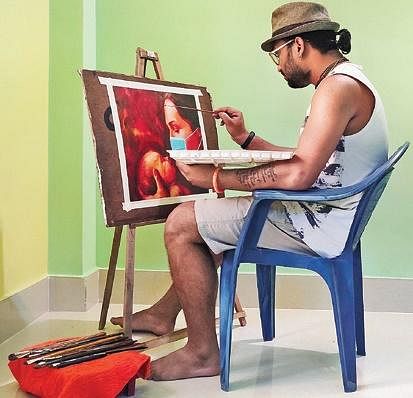 Started by Delhi-based-artist Ayesha Singh and Purvai Rai, the idea has so far seen more than 5,000 artworks being put for sale. “We wanted to create a community for artists, especially beginners. Though there were a few groups who were working for these artists, the situation started getting worse post COVID,” says 29-year-old Singh. The duo was also inspired by a movement in UK, called Artist Support Pledge.

She adds that the initiative is a democratic platform, with the founders not making any money. Though the initial idea was to create a space for artists, soon the memo changed to monetising their art work. “Even if an artist gets a space, selling their art work was also important,” adds 25-years-old Rai. The last time Rai checked, more than Rs 10 lakh worth of artworks had been sold.

Among the artists are Sareena Khemka, a Bengaluru-based visual artist, who sold two of her art works under this initiative. “This is a great way to put your work on sale and network. Even if the sale is as small as Rs 10,000, it’s still a huge deal for many artists,” says Khemka, who hails from Kolkata. Out of two artworks that she sold, one was close to her heart. “The painting is just about stairs. I made it when I was missing my home in Kolkata, which has wooden stairs,” says Khemka. Though all her paintings haven’t been sold yet, she says, “It does not matter if many of us have not reached the Rs 50,000 mark, there is still some sale of art.”

For Pritam Nayak, a water colour artist from the city, the closure of galleries has left him with barely any commissions. “I heard about this initiative from an artist circle and managed to sell one of my works,” says 24-year-old Nayak, whose paintings usually start from Rs 10,000. Vikas Shiyal, who shuffles between Bengaluru and his hometown Ahmedabad, says, “Out of 10 artworks that I have posted under Art Chain India, four have been sold. It’s a huge motivation for the artists,” says Shiyal.