BENGALURU: Air pollution in the city has come down and the state pollution control board officials and citizens credits the lockdown for the same. According to Karnataka State Pollution Control Board, there has been a 35 per cent drop in air pollution in just one day (from March 21 to March 22). With less people moving on city roads, one can see more birds and even butterflies fluttering around. Scavenging birds can be seen on garbage piles, aquatic birds can also be seen around waterbodies.

“A few days of lockdown has shown that there is another side of Bengaluru. The chirping of birds has replaced the otherwise shrill horns,” said Komal L, a citizen. KSPCB Member Secretary Basavaraj Patil told TNIE that the prime reason for the reduction in air pollution was the lessened vehicular movements. This is an indicator that the number of private vehicles on the roads need to be reduced. Another reason for pollution is industries, which have now come to a standstill from Tuesday, so there will be more reduction in the coming days, he added. Apart from KSPCB, private agencies reported that in Whitefield, there are 13 quality seasons installed in Varthur Kodi, Kundalahalli Junct i o n , T u b a r a h a l l i , Ramagondanahalliand others, which have also shown a decrease in pollution levels. Shiv Shankar, founder of Mapshalli said, “The pollution levels had significantly gone down on March 22 (Janata Curfew day), it recorded only 35.7 ugm3 (micro grams per metre cube), where last year same date it was 41.4ugm3.

Similarly, if we see data when partial lockdown was in place (ie. March 14), there has been a significant decrease from the previous days. However on March 22, there was a sudden increase in air pollution, to 54.3, but on Tuesday with the state entering total lockdown, the pollution level decreased to 30 ugm3 levels.” Madhusudan Anand, co- Founder, Ambee said, “Over the last few weeks, due to decreased vehicular movement in the city, rainfall and reduction in garbage burning and construction, there has been a significant improvement in air quality. Some of the key areas like Indiranagar and MG Road had AQI levels of about 57 and 42, a remarkable shift from what we see otherwise. With the lockdown continuing for another few weeks, we can expect imp r o v e d a i r q u a l i t y across Bengaluru.” 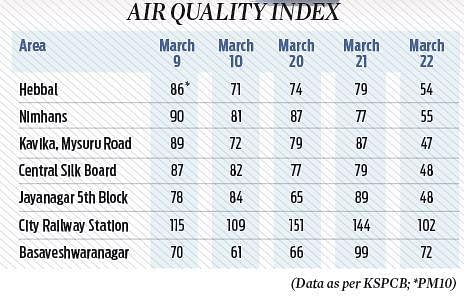