Gandhi: The most stamped person

Collecting stamps (philately) was the most popular hobby during my childhood. It’s almost a dying hobby now, at least among the youth.

BENGALURU: Collecting stamps (philately) was the most popular hobby during my childhood. It’s almost a dying hobby now, at least among the youth. The influx of digitisation has resulted in the death of letter writing and with it the idea of collecting stamps as a hobby. Though stamps are still being printed and record prices are being set at auctions, it has gradually become a hobby of the older generation.

While parting with my stamp collection, the only stamps I retained were a pre-Independence stamp with the inscription Azad Hind and a set of four Gandhi stamps in mint and unhinged (that is, with full original gum) condition. The Azad Hind stamp was created by the German artist Werner von Axster-Heudtlass for Subhas Chandra Bose’s Azad Hind (Indian National Army) and printed in Germany by the Reich printing office. 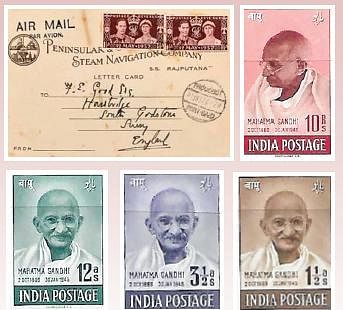 The four Gandhi stamps are a reminder for me of the most stamped person in the universe!A set of 1948 stamps picturing Gandhi was sold for a record $598,000. The unique strip of four 10-rupee stamps is considered the most important and desirable item of post-Indian Independence philately. The purple-brown stamps are emblazoned with the word “service” and were issued to the governor-general’s secretariat for official use.

Gandhi stamps remain the most sought-after stamps around the world. One of the most passionate Gandhi stamp collectors, Revati Natesan, is based in Marin County, California. Her journey began when she started researching the phrase ‘Gandhi is the most stamped person in the Universe’. She soon found out that by adorning the edges of envelopes, stamps from over 150 countries were quietly paying homage to Mahatma Gandhi by conveying various facets of his life: early struggles, brilliant political strategies, and relentless pursuit of different ways to relate to the masses.

Revati has used her understanding of Gandhi and his message to start her own non-profit called ThinkGlobal Arts Foundation, with a mission to spread peace around the world. One of the rare stamps in her collection is the one that travelled with Gandhiji from Bombay to Marseilles on the SS Rajputana. The post used to be transported on mail boats called Paquebot. Revati has a stamp that co-travelled with Gandhiji on the boat!

Another interesting stamp was issued by Namibia when it got its independence from South Africa. The postal cover has the picture of a woman conveying her thanks to Gandhiji (Namibia followed Gandhiji’s principle of non-violence to gain its independence).Another stamp was released when the movie Gandhi was released. The entire message about Gandhiji is contained on the tiny 1-inch by 1-inch piece of paper!

Natesan’s research led her on an awe-inspiring journey into the world of the Mahatma, and ultimately the creation of an exhibit entitled ‘Gandhi, the most stamped person in the Universe, a philatelic exhibit’. The exhibit records the major events in his life and the values he lived by – from his birth in 1869, through his school years, his career as a lawyer in South Africa, the nationalist movements in India, his assassination in 1948, and ultimately the glorious legacy of peace and non-violence that he left behind. The exhibit has travelled to several cities across the United States.

When asked what her most precious Gandhi stamp was, Natesan said, “It is not the stamp but his message, his life. Here was an ordinary man, in many ways no different from any of us, who through sheer honesty and tenacity was able to grow and go beyond to inspire others around the world to higher levels of being.”
(The author is a technologist based in Silicon Valley who is gently mad about books.)