I wouldn’t wish this fate on anyone: Comedian Munawar Faruqui on prison time

Munawar was arrested on January 1 just before he was about to start his performance at a cafe in Indore.

BENGALURU: If things had gone according to plan, Munawar Faruqui would have spent his 29th birthday doing something he loves: Making people laugh. And while he was never one for birthdays, spending the day in jail was never on the agenda. “I wouldn’t wish this fate on anyone,” says Munawar, who was in Bengaluru on Friday for a show at MLR Convention Centre in Whitefield.

Munawar was arrested on January 1 just before he was about to start his performance at a cafe in Indore. He and others arrested were denied bail by several lower courts. He walked out of jail after the Supreme Court granted him interim bail on February 5.  The 37 days he spent in behind bars for allegedly hurting Hindu sentiments felt much longer. “You feel like an entire day has passed but when you check the time, it’s just 9 am. One day is equal to 10 in prison,” he says. 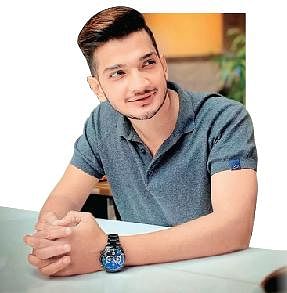 While it felt that the hours dragged on in jail, the thoughts in his mind were racing. “No matter how composed you are, 50 things play on in your mind. All at once,” Munawar says.  But where sleeping pills failed to address his insomnia after getting out - he’s given them up now - there was comfort in comedy. Two weeks after he was released, he was back on stage, doing what he does best.

“What happened in Indore is something I can’t forget. But when I perform, the people sitting in front of me have a lot of respect and love for me. And I can see it in their eyes and smiles that they believe I am innocent,” says Faruqui, who is consciously choosing to say his bit through the content he puts out on his social media. Cases in point: Short sketches filled with jail puns, funny tweets, and now, a full-fledged song, Aazmaish, which came out on March 27. The over four minutes-long song, which also features the artiste Nazz, details the comedian’s side of the story and his experience of the ordeal.

But has the incident triggered an internal censor? He answers in a heartbeat: “No. I never intentionally tried to hurt someone’s sentiments or cause pain with my words. I don’t consider any topic off limits now because my content has always been varied. There are jokes on my childhood, my friends, Bollywood films. There are all kinds of jokes. People might expect political satire but they get so much bonus content too,” says Faruqui, who ventured into comedy in 2018, after pursuing a series of jobs such as selling utensils and working as a graphic artist.

Doing what he does best
Munawar Faruqui’s visit to namma ooru may have been brief but it managed to leave an impression on him. “My show was supposed to be for two hours but it went on for two-and-a-half,” he says, adding that all Covid-safety precautions were followed. “I performed two shows and received a standing ovation for both.”

Now we are on Telegram too. Follow us for updates
TAGS
Munawar Faruqui