BENGALURU: With the second wave of the Covid-19 pandemic raging in Karnataka, the number of positive cases in Bengaluru is galloping.  The city’s active rate has shot up in a month’s time -- from 1.05 per cent on March 4, it was 6.82 per cent on April 5. Active rate is the number of cases currently under treatment, in proportion  to the total number of Covid-positive cases recorded since the beginning of the pandemic.

Bengaluru Urban is one of the districts contributing the highest number of cases. Active cases recorded, as of April 5, stand at 30,782, a huge rise over last month. The number of cases on January 22 was just 4,598. Officials pointed out that with the sudden reduction in testing during January, the number of positive cases slipped under the radar. More importantly, people stopped adhering to Covid protocol, like wearing masks, and started conducting large gatherings. The movement of people from high caseload states like Kerala and Maharashtra, also led to the infection spread.

As per an analysis by Project Jeevan Raksha, Bengaluru Urban has conducted tests on over 56 per cent of the total population, while Delhi has tested 80 per cent, Mumbai has tested only 14 per cent, and Chennai has carried out 24 per cent tests. “In terms of tests per million population, Bengaluru tested 5.6 lakh per million, while Chennai tested 2.43 lakh per million population. In March, Bengaluru’s active cases shot up by 545% -- from 4,356 on March 4 to 28,098 on April 4. 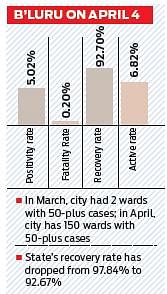 Chennai witnessed a relatively lower surge rate of 357%. There are two reasons for this: the Tamil Nadu government’s decision not to open schools and colleges, except for examinations and other critical activities, has paid rich dividends. Another reason is effective rollout of vaccination. In Bengaluru, only 6 per cent of people are vaccinated,” the analysis said.

“Bengaluru has always witnessed sharp oscillations in terms of Covid cases as compared to other mega cities. It had succesfully managed to bring the situation under control by taking swift action. I hope the situation will be under control soon,” said Mysore Sanjeev, project convener.  A BBMP official pointed out that with the increase in contact tracing, the number of cases is gradually increasing. “From 1:20 ratio, we are trying to increase tracing to 30 contacts for one patient. Many are turning positive, resulting in an increase in number of cases. We need to focus on effective containment measures to avoid spread of infection.”

Dr Manohar KN, consultant physician, said many people are not coming forward for testing. “The second wave or Covid-19 (mutant/existing) is showing a different avatar. Patients come with symptome such as a headache, diarrhoea and vomiting, fatigue and fever. A majority of them don’t want to be tested. It looks like the second wave is affecting youngsters and children, two subgroups which were largely asymptomatic in the first wave.”

Now we are on Telegram too. Follow us for updates
TAGS
Bengaluru COVID 19