Having fun with Funfair

Put on your gears, assemble, your staff and  start building a theme park to attract as  many people as possible.

BENGALURU : In Funfair, you and up to three other players are cast in the roles of theme park designers. Over a series of rounds, you’ll hire staff, construct attractions and try to lure as many people as possible through your shiny gates, all in the pursuit of having the most points when the dust has settled.

Funfair is a generous game, and it shows its hand very early each round begins with an event that affects all players and, unlike almost every other game with events, these are universally great things. Don’t mistake the game’s largesse for simplicity, however; it’s just that Funfair chooses to not use scarcity as the foundation of its challenges.

And it does feature challenges aplenty, as your capacity to expand your park depends entirely on your finances and your finances depend entirely on you guessed it the paying public who want to visit the park you’ve built. This tightrope you’re required to walk doesn’t get easier the more of Funfair you play, but you will start to see the combinatorial potential underneath its skin.

Every card in Funfair offers some level of intrinsic value, but many of them feature the potential to combo very nicely with other potential set-ups you can build. The employees you can hire will either reward you for building your park a particular way, or will help you squeeze a little more money out of your attractions, Meanwhile, those attractions themselves can be jazzed up in various ways by adding utilities and services and most importantly themes. 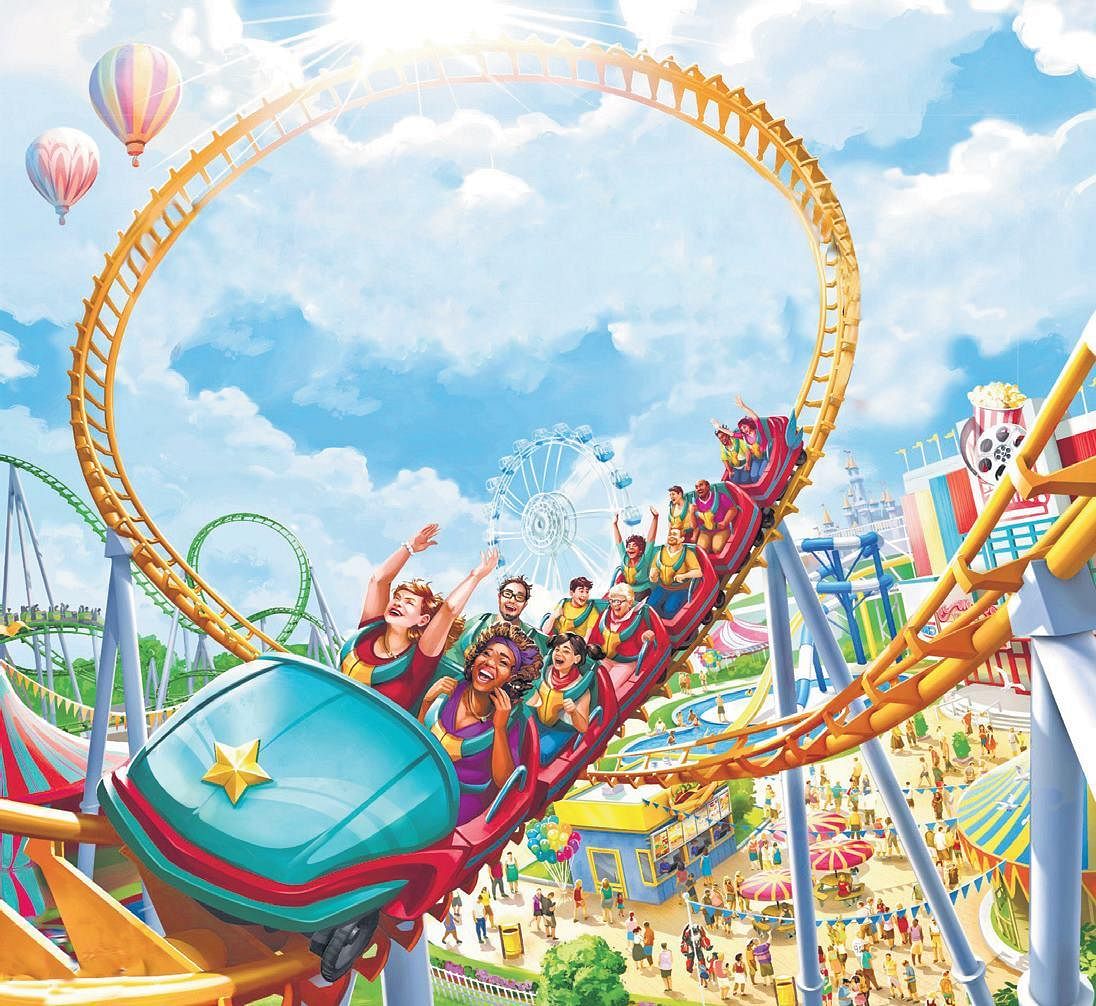 You see, each attraction you build can have a theme applied to it perhaps you’ve got a jungle-themed restaurant, or a piratical rollercoaster. Every theme’s got a special ability attached to it, but that’s almost secondary to how right this feels thematically of course there’d be a barely-relevant theme applied to a theme park attraction, that just makes sense! If you spent any part of your life playing and loving Rollercoaster Tycoon (or any of the other theme-park management sims that came out on the PC), this is going to speak to you in a way that no other game really has.

Ultimately, it’s the little touches that I appreciate the most about Funfair. For example, the deck of blueprints is taken out of the game a couple of rounds before the end so that players can’t essentially luck into a win by accidentally drawing a card that’s perfect for what they’ve done so far something that all-time-great Ticket to Ride is susceptible to. Even something as little as the fact that the board is double-sided to make it easier to read depending on how players are seated around the table shows the level of care and attention to detail that went into this game, and it’s really paid off; Funfair is a keeper.

Unfair
Funfair is actually a reimplementation of a 2017 game called Unfair. Although it shares the same theme, Unfair is a much harsher and more cutthroat type of game with a definite focus on sabotaging other players. To balance that out, it offers more variety and depth than Funfair; which makes it the ideal next step if you love Funfair, want more, and aren’t put off by a little ruthless capitalism.

Mythic Battles: Ragnarök
Speaking of capitalism, Monolith is back on Kickstarter with their latest entry in the Mythic Battles series and, as expected, it’s not doing too badly at all. At well over a million dollars raised with over a week to go, this particular take on the Norse end-of-days looks set to be one of 2021’s biggest hits.

John Company: Second Edition
From the mythical to the historical, we come to the second edition of the critically- acclaimed John Company, which is also currently on Kickstarter. This is an interesting one to write about, centred as it is around the British East India Company, but designer Cole Wehrle has studied the subject matter extensively, seeking as he does to provide an in-depth and unsparing portrayal of an institution that was ‘as dysfunctional as it was influential’.

(Arjun is a gamer, book lover and an all-round renaissance man)

Now we are on Telegram too. Follow us for updates
TAGS
Funfair Online games