TAC had recommended fortnightly RT-PCR testing of all teachers, pupils and staff in educational institutions and Anganwadi centres to identify clusters.

BENGALURU: The Technical Advisory Committee’s (TAC) warnings and suggestions in November 2020 about getting prepared for the second wave, based on its recommendations, were largely ignored by the state government, which may have caused the present chaos across the state, mainly in Bengaluru, irked committee members have said.“It’s unfortunate that nothing was done on the ground,” they said.

TNIE got access to the ‘Advisory on Recommendation and Containment Measures for Second Wave of Covid-19 in Karnataka’, which was submitted to the Department of Health and Family Welfare, Karnataka, on November 30, 2020.An expert on the committee said, “We had clearly mentioned how early recognition of the second wave can be done by closely monitoring the seven-day average growth rate and reproduction number at district levels, and the committee had clearly predicted that the second wave in the state was expected in January-Febraury 2021. A minimum of 1.25 lakh tests per day should continue till the end of February 2021, of which 1 lakh shall be RT-PCR (1:5 pooled in lab as per state protocol).” 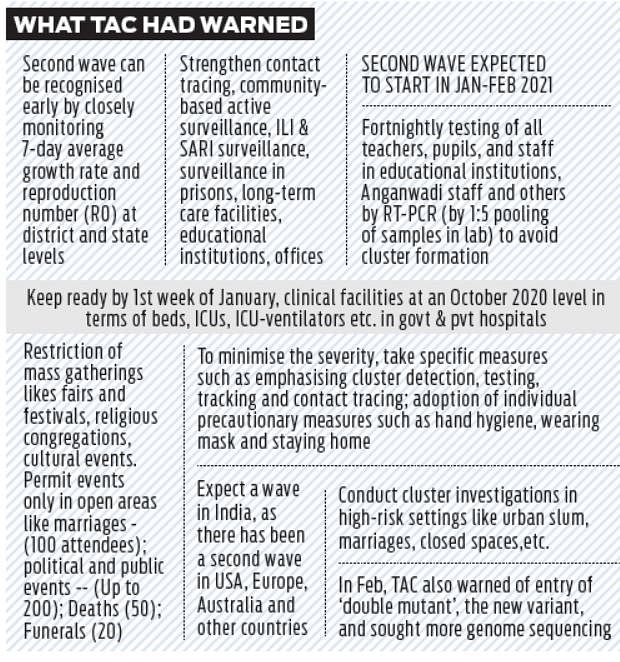 The expert said that in February, when the new “double mutant” was seen in Maharashtra with cases rising exponentially, “We had clearly said Karnataka needs to be very careful and has to increase its genome sequencing (GS) as very soon, the state would see a massive rise in cases. But nothing was done to encourage GS. Very few numbers were tested.”

Irked by several U-turns the government took while considering TAC recommendations, another senior expert said, “The implementation of all those SOPs would have prevented such a situation. Unfortunately, we saw only U-turns in the orders passed.”

TAC had recommended fortnightly RT-PCR testing of all teachers, pupils and staff in educational institutions and Anganwadi centres to identify clusters. “But this was thrown to the winds,” another expert said.

Interestingly, health infrastructure was said to be ready by the first week of January to the level of October 2020, including beds, ambulances, ICUs, ICU-ventilators etc, both in government and private hospitals. Meanwhile, the TAC said these recommendations is to largely reduce the disease burden and prevent mortality.