Method In Madness is Iyer’s account of adventure in bureaucracy, and is peppered with life lessons and fun

BENGALURU: Jaiye aur Bharath ko swachh banaiye’- the clarion call to Parameswaran Iyer by Prime Minister Narendra Modi was enough to unleash the plan to take on one of the world’s toughest projects- Swachch Bharat Abhiyaan. In Method in Madness, published by Harper Collins, Iyer documents his journey in the Indian administration and the challenges he faced. A 1981 batch IAS officer of the Uttar Pradesh cadre, Iyer was Prime Minister Modi’s go-to man for Swachh Bharat Abhiyan.

His stint as sector manager for water and sanitation with the World Bank made him the perfect candidate for changing the attitudes of 500 million people with regard to sanitation: Making India open defecation-free in three years when only 35% of the rural population had access to sanitation. The book chronicles the different roles Iyer has donned, starting with being an IAS officer to working in the World Bank in Washington D C and taking a break to be road manager for his daughter Tara and son Venkat, in tennis, to finally working as a Secretary to the Government of India under the Ministry of Drinking Water and Sanitation.

“My wife advised me to write this book so that it becomes a source of learning for aspiring civil servants. The opportunity presented itself in the form of lockdown last year,” says Iyer. Method In Madness is a pacing read about Iyer’s career and his takeaways from his experiences. “The book gave me an opportunity to share my experiences in the form of pro-tips which are for anyone starting out in their career. There are 30-odd tips and each of them relate to an actual experience I had,” says the 61-year-old. 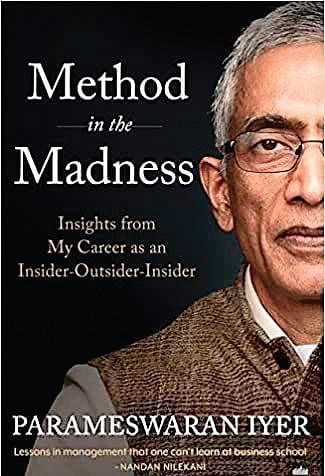 Some of his interesting experiences listed in the book includes, managing the law and order during the anti-Sikh riots in Dehradun at the time of former Prime Minister, Indira Gandhi’s assassination, learning about sanitation models in Afghanistan, Africa, and China during his World Bank stint, and facing critics of the clean India programme. Iyer’s lateral entry to the government has been an irritant for many of his colleagues.

“When I assumed office as the Secretary I had the IAS credentials removed because I was technically not in the IAS. There was  resentment among some officers due to my direct appointment as the secretary,” says Iyer. When India was declared an 100 % ODF country in 2019, many critics questioned the data presented by the Ministry of Drinking Water and Sanitation.

Iyer says “We are very confident about the numbers. Even the World Health Organisation came out with a report on India saving many lives by preventing infections due to open defecation. The Jal Jeevan mission which aims to provide access to drinking water for 150 million rural household is yet another initiative amplifying the Swachh Bharat campaign,” says Iyer who is now in Washington DC as a lead for World Bank’s Water Global practice.