BENGALURU: More than 15 musicians, four songs and one happy feeling — AR Rahman’s rooftop jam in one of Chennai’s highrises is just what we need in these dystopian times. The four-minute video released on April 21 is a music medley weaving a combination of four of Rahman’s original tracks including Veere Kadh De, Rang De Basanti, Balleilakka and O Aashiq. Conceptualised by the musical maestro, the rooftop jam attempts to nurture a positive vibe amid the struggling times of COVID- 19. Three Karnataka-based artistes found a spot in this session. Nakul Abhyankar, a Bengaluru- based musician, who played the keyboard and mixed music for the medley describes the experience as “serenity”.

This song sort of tries to wake you up with a good and positive beginning. It’s a symbolic gesture with nature and music contemplating each other to produce a fresh wake up call for the city,” says Abhyankar. Viewers can see the sun rising from the Bay of Bengal in perfect sync to the beats. Talking about some of the behindthe- scenes moments, he mentions that the video was shot just in sync with the sunrise, giving a serene experience. “With the sun rising at around 6 am, we had only an hour to wrap up the shoot. 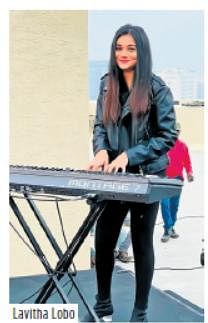 We managed to pull it off in 15 takes and nature just blended with our performance perfectly. It was an organic way of presenting music to people,” he says. Lavitha Lobo, a Mangaluru-based musician, is on the keyboard, too. Lobo says, “It was just surreal. Rahman sir ensured that everyone enjoyed the music.

We rehearsed the entire night and hit the shooting spot at 5 am. With the birds chirping around and the sea gleaming in the back, the experience was just one of its kind. Moreover, Rahman sir also informally choreographed some of the dance movements.

The song also strives to give a sense of hope in these stifling times. The arrangement and the setup just delivered that.” Along with singers Benny Dayal , Shashwat Singh, Shashaa Tirupati and other young artistes was Mysuru girl Rakshita Suresh. Singing during sunrise on the terrace was a first for her. “It is the most beautiful thing I have ever seen.

I got to see the sunrise after a long time. Performing Balleilakka song from the film Sivaji, along with Rahman sir, was the best moment,” says Suresh. A lot of subtraction went into the music and the songs, in terms of instruments and the tune, to mellow down some of the high-pitched and fast-paced songs, report the artistes. The video also features the musical cast of 99 songs, including lead actor Ehan Bhat and director Vishwesh Krishnamoorthy.