There’s no help coming from 108 helpline, top officials get the feel

Initially, there was no response at the other end. After several attempts, the tele-caller picked up the call, only to get an earful from Gupta.

BENGALURU: Well, it looks like even the top official of the Bruhat Bengaluru Mahanagara Palike (BBMP) cannot get any ‘help’ from the helpline dedicated for bed allocation for Covid-19 patients.Senior BBMP and health officials on Friday got a first-hand experience of the mess in bed allocation among Covid patients.

As it turns out, there was trouble at very first step of calling the ‘108’ helpline. And this was experienced by none other than BBMP Chief Commissioner Gaurav Gupta. He found this to be the biggest challenge of all, which often leads to patients and their families, relatives and friends running helter-skelter in a desperate bid to look for a bed and save a dear one’s life. 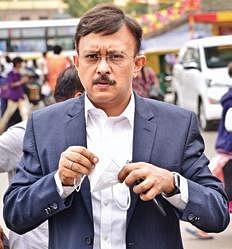 Gupta was in for a rude shock when he called the 108 helpline for The New Indian Express to check. Initially, there was no response at the other end. After several attempts, the tele-caller picked up the call, only to get an earful from Gupta. “Why do you people not pick up calls?” he raged. To this, the tele-caller nonchalantly replied, “I picked it up just now”.

Obviously, the tele-caller hadn’t recognised the man on the other side of the line. Gupta had to reveal his identity as BBMP Chief Commissioner to get the person fall in line. He then questioned why the needy were not being catered to, to which the tele-caller said there was no such case.  But when this reporter, on a parallel call, quoted instances when there was no response from the helpline, the tele-caller said he could not hear anything and blamed ‘technical issues’ for it.

That’s not all. In another instance which highlights the distressing ground situation, a senior BBMP health department official on Friday told a person looking for a bed for a colleague: “We are in the ICU at the moment.Please do not embarrass us by asking for help to book a bed.”

Tushar Girinath, nodal officer in-charge of ‘108’, admitted that there were issues with ‘108’ and they were working on it. He said two master bed management facilities were set up at Rajiv Gandhi Institute of Chest Diseases and KC General Hospital for ILI/ SARI patients from 108. Even if the SRFID number is generated but the patient code (BU-) is yet to come and the patient’s health is deteriorating, 108 can use the provision to book a bed for the patient, he said.

BBMP chief Gupta said people can now reach out to ‘1912’ for help, but only when they have a SRFID number or are ILI or SARI patients.Health and Family Welfare Commissioner Thrilok Chandra spent half a day at the 108 call centre to resolve the issues, but that too of little use as many patients continued to face difficulties as the day progressed. The Health Department is now working on changing the personnel manning the 108 helpline, hoping that problems will be resolved.“But in reality, unless the tele-callers are more proactive, sensitive, well connected with numbers and bed availability data, nothing will improve,” the senior BBMP health official said.

Now we are on Telegram too. Follow us for updates
TAGS
108 helpline BBMP Bengaluru COVID 19