Monsoon to arrive in Bengaluru by first week of June

An expert cited that under normal circumstances, after the monsoon touches the Kerala coast, it takes about 5-7 days to reach Bengaluru and can be expected by June 7.

BENGALURU : After months of scorching heat, it’s time to look forward to rainy days. The South-West monsoon, which is expected to hit the Kerala coast by May 31, will reach Bengaluru by June 7, according to state officials from the India Meteorological Department (IMD). 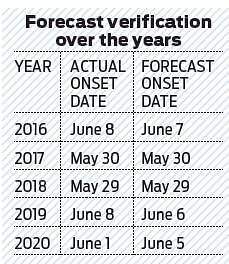 However, there could be a difference of 3-4 days, depending on the weather systems, they pointed out. The Director In-charge of IMD Bengaluru, CS Patil, told The New Indian Express that under normal circumstances, after the monsoon touches the Kerala coast, it takes about 5-7 days to reach Bengaluru and can be expected by June 7.

Sometimes, there are formation of weather systems due to which the arrival of monsoon is either advanced or delayed. But, at present, the rainfall, formation of systems and other patterns are favourable for the timely setting-in of the monsoon, he said.

According to the India Meteorological Department  bulletin released on Friday, the monsoon onset progress over the Andaman Sea is May 22. At present, a depression is formed over Lakshadweep area and its neighbourhood.

The depression is likely to intensify into a cyclonic storm during the next 24 hours and is very likely to move north-northwest and reach the Gujarat coast by May 18. This cross-Equitorial flow is likely to strengthen and deepen over the Bay of Bengal from May 20 and rainfall is likely to activate around
May 21.

Now we are on Telegram too. Follow us for updates
TAGS
IMD Bengaluru rains Bengaluru monsoon