No more leniency for traffic rule violators from today in Odisha

BHUBANESWAR:  Even as the state government has given three-month extension to vehicle owners to update required documents ready, there will be no leniency for violators of traffic rules.

Motorists found with over speeding, red light jumping, drunken driving, using cell phone while driving, dangerous driving, triple riding on two-wheeler, driving against flow of traffic, overloading, not wearing helmet and seat belt will be penalised as per the provisions in the new Motor Vehicle Act. 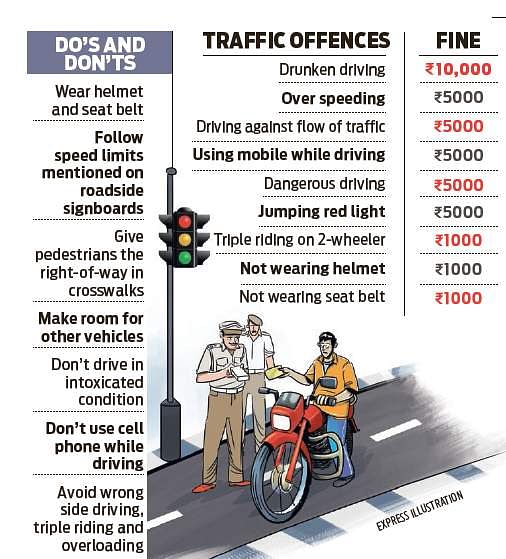 Commerce and Transport Minister Padmanabha Behera said the three-month breather has been given for compliance of documents only for those who have not yet obtained driving licence and renewal of registration and pollution certificates.

“There will be no leniency for the violators of traffic regulations. If anyone is caught while violating road rules, his/her documents will also be checked and penalty imposed. It is the responsibility of every citizen to obey traffic rules to reduce road accidents,” he said.

The State Transport Authority has directed all Collectors, SPs and Deputy Commissioners of Police to strictly enforce the road safety regulations. They have been asked to instruct enforcing officials to check documents only of traffic offenders.

Transport Commissioner Sanjeeb Panda has advised the district officials to avoid routine checking of documents in respect of vehicle users during the period unless input received regarding stolen vehicles or suspicious activities.

He has suggested to detain three to four vehicles at a time while checking to minimise the inconvenience to the public and ensure normal flow of traffic. Meanwhile, the Commissionerate of Police has geared up for rigorous implementation of the traffic regulations. Commissioner of Police Sudhanshu Sarangi has warned that challans will be issued if a motorist is caught violating traffic norms.

“If violators fail to pay fines on the spot, the penalty amount will be added to the account of the vehicle user at their respective regional transport offices. They will have to pay the fine with interest,” he clarified.

Sarangi said there may not be any police or transport officials to check your activities on road. But challans will be issued against the violators as per footage from CCTVs fixed at major junctions. While an automatic number plate reader machine has been installed at Rupali Square in Bhubaneswar, other city squares will obtain it soon.

Bhubaneswar: Odisha Police has launched a crackdown in the State and arrested 140 persons for drunken driving in the last 24 hours. In-charge DGP Satyajit Mohanty said the drive was started at 4 pm on Friday in major towns to warn people that traffic rules violation will not be tolerated. “The arrested drivers were under the influence of alcohol. They have been fined Rs 10,000 each as per the provisions of MV Act 2019. Highest 27 drunk drivers have been arrested in Ganjam. Our drive against drunken driving will continue,” he said. A motorcyclist was also fined Rs 10,000 for drunken driving in Banki of Cuttack.

More from Bhubaneswar
Now we are on Telegram too. Follow us for updates
TAGS
Traffic rules Odisha Traffic Police