BHUBANESWAR: SARS-CoV-2 clade - 20A and 20B have evolved quite rapidly in Odisha and are responsible for the surge in Covid-19 infections in the State. A recent study carried out jointly by Institute of Life Sciences (ILS), Bhubaneswar and Regional Medical Research Centre (RMRC) found all five clades - 19A, 19B, 20A, 20B and 20C in 225 genomes sequenced in the State. 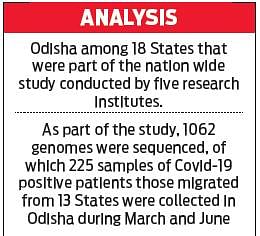 While 20A clade was found in highest 73 samples and 20B in 60 samples, 19B and 19A were present in 36 and 29 samples respectively. The 20C clade was observed in four samples and specific to Odisha. The study showed evolution of 19A and 19B in parallel. Majority of the 19A and 19B clades were present in people who migrated from Gujarat suggesting it to be one of the major initial points of disease transmission during March and April.

Scientist of ILS Dr Sunil Raghav said the phylogenetic analysis showed that 20A and 20B clades evolved quite rapidly and are major source of disease transmission in the State. “The viral load in samples observed with both clades was high compared to other clades. The transmission efficiency and infectivity of the two clades were high,” he said.

It has been observed that 20A clade, which is prevalent in Europe, became abundant in Odisha from April representing the top cluster, while the bottom cluster represents samples belonging to 19A and 19B having a common origin in South-east Asia. ILS Director Dr Ajay Parida said 19B clade was found to be more prevalent (17 per cent) in analysed samples as compared to other clades reported so far in the country. The analysis also revealed higher proportion symptomatic patients with 20A, 20B and 20C clades. The clade 19A is the Wuhan clade from China.

“Europe and Southeast Asia were found to be two major routes of disease transmission in Odisha,” Parida said. Samples of Covid patients from 17 districts, including Ganjam, Khurda, Cuttack, Jajpur, Balasore, Bhadrak, Puri, Sundargarh, Balangir, Kendrapara and Jagatsinghpur were taken for genome sequencing by by the team led by Dr Raghav and Dr Jyotirmayee Turuk of RMRC.