Restaurants down shutters as dine-in remains shut in Bhubaneswar

The prolonged lockdown has triggered an existential crisis for restaurants in Bhubaneswar.

BHUBANESWAR: The prolonged lockdown has triggered an existential crisis for restaurants in the City. Be it the chain restaurants or standalone outlets, five months of lockdown has hurt them all.

Takeaway or online delivery model of operations cannot sustain the business. The virus fear has led to a sharp decline in the number of orders received by restaurants per month. Moreover, the 30 per cent share charged by online aggregators has left them high and dry. The cumulative cost of non-negotiable rentals, minimum demand charge of electricity, staff salaries and other maintenance charges far outweigh the earnings through deliveries. A few have already decided to opt out of the business. The one-year-old outlet of a Bengali chain restaurant, Bhojohari Manna, in City’s Unit 4 area has downed its shutters permanently.

“The impact was so bad that we had to shut down in Bhubaneswar. Though the outlet in Puri is still there, but sooner or later we may have to pull out if the situation doesn’t improve. The online system doesn’t justify the economy. We were forced to take the drastic step because the landlords were not very flexible,” said Siddhartha Sankar Bose, one of the founding directors of the brand.

New Delhi native Tushar Dutta who opened restaurant ‘Caffeine’ in Bhubaneswar’s Patia last year is feeling the pinch. “There has been a 65 per cent fall in weekly business after resumption of services in the last week of April. There are 18 staff and I am able to pay the entire salaries of just six of them,” he says. The rest get 50 per cent of their pay and have been asked them to rejoin once the dine-in facility resumes.

The State Government stopped dine-in a day after re-opening the hotels and restaurants earlier this week. Dutta has to shell out Rs 76,000 towards rent, excluding the electricity, and about Rs 70,000 to the staff after reducing their salaries. “Generating income has become an arduous task with major chunk being shared with online food aggregators,” he says.Colleges and universities remaining shut has worsened the situation as most of the students have returned to their native places. People staying with their families order food from restaurants maximum for two to three times in a week, says Dutta.

At Mainland China, another popular chain restaurant, monthly business of Rs 20 lakh has plummeted to Rs 3 lakh. “We have requested the State Government for bailout packages, but haven’t received any subsidies. The Hotel and Restaurant Association of Odisha has written to the Energy Department seeking waiver of the minimum demand charge of electricity but no one responded,” said a top official of the restaurant’s City outlet.

As a cost-cutting measure, most outlets have opted for slashing salaries of the staff. The staff members who have not been called to work are being paid between 10 to 20 per cent of their wages. The senior staffers have taken pay cuts as hefty as 50 per cent.

Monthly rentals are huge impediments for the standalone outlets, whose revenues are not optimised by overall turnover of the group. A popular bar-cum-restaurant, Booze Buzz Inhouse, that runs from a fancy courtyard bears rental liabilities of more than Rs 1.5 lakh per month. Though the owner claims to have received 20 to 15 per cent rental concession for the lockdown period, the overhead expenses were huge.“Even when we kept the restaurant completely shut during the lockdown, we had to bear the monthly expense worth around Rs 3.5 lakh to Rs 4 lakh. We had to pay for the bar licenses too,” said one of the founders, Akashdeep Singh. For a restaurant that had invested handsome amounts for sprucing up the interiors or decors, sudden conversion to a delivery outlet is economically challenging.

President of Restaurants Association of Odisha Rajiv Swain said with no dine-in permission, most members are finding it difficult even to pay the rent and entire salaries of their staff. “The staff of a restaurant in Chandrasekharpur District Centre joined petrol pumps for survival. If the situation continues, staff who have quit will never work with the restaurants again which means we will not have adequate manpower to operate,” Swain said.

There are about 450 to 500 restaurants in the City having GST registration. If the dine-in facility continues to remain suspended, many owners will have to close their restaurants as over 90 per cent of them are running their businesses on rented property.

With online food aggregators charging a hefty commission, the Restaurant Association of Odisha has decided to collaborate with FoodFindo and launch a local online food delivery platform. The local food aggregator’s app is expected to be available on Play Store from August 15. Meanwhile, owners of smaller kiosks operating from malls have cited non-cooperation from the mall managements in matters of rent. “We are being forced to pay the entire rent for the lockdown period. We also cannot move out because the security money is deposited with them. When we haven’t earned a penny, how can we pay them?” said the owner of an ice-cream kiosk, requesting anonymity. 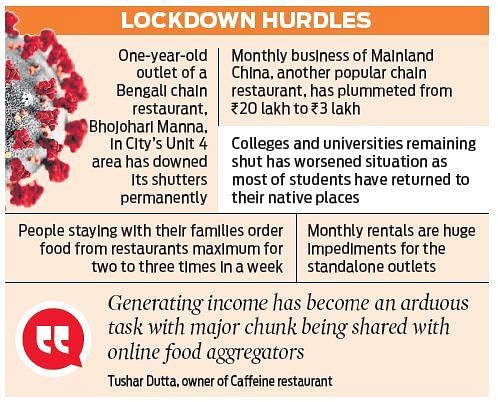 Now we are on Telegram too. Follow us for updates
TAGS
Bhubaneswar restaurants Bhubaneswar