It is suspected that the elephant was electrocuted in the trap laid for poaching boar.

BHUBANESWAR: The two elephants found dead in Keonjhar on Sunday were electrocuted by a trap set by poachers, preliminary investigation suggested.A team of senior forest officials comprising Additional PCCF Sashi Paul and Rourkela RCCF Bhanja Kishore Swain along with Keonjhar DFO Santosh Joshi went to the spot for investigation on Monday.   Forest officials say the two elephants had come in contact with a trap connected to a 11 KV live wire laid in a reserve forest under Champua range. Carcasses of the two elephants, a male and female, were found in a decomposed state in Gurubeda under the Baitarani B reserve forest. Poaching is being suspected as one of the tusks of the male elephant, said to be about 8-years-old, was missing. 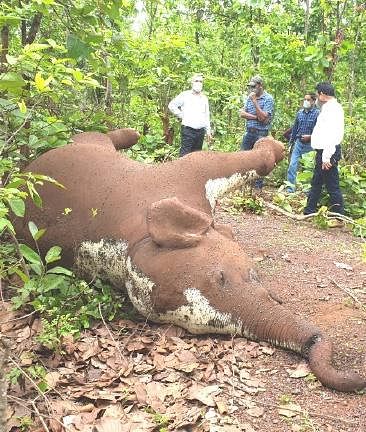 It is suspected that the elephant was electrocuted in the trap laid for poaching boar. Forest officials have recovered the binding wire and other material used to lay the trap. The Additional PCCF said they have got some leads in the case and forest division has been asked to take help of the local police to track down the accused.

Despite spending crores of rupees, Forest Department has not been able to prevent poaching in the State. The increasing cases of poaching of the elephants has raised questions on field intelligence and patrolling as the forest officials of Champua range were clueless about the incident till locals informed them.

A month back, two elephants had  been killed, while four jumbos died in the Champua range in the last three months. Data of wildlife wing of  Forest and Environment department suggest that on an average, the State has been losing 73 elephants a year due to poaching, electrocution, train and road accidents besides diseases. With lockdown in place and focus of all departments remaining on containing the health pandemic, poachers are having a field day.

Stay up to date on all the latest Bhubaneswar news with The New Indian Express App. Download now
TAGS
elephants