Of 1,000 cycles, around 700 were in working condition at the time of handing over of the project to BSCL in October last year.

BHUBANESWAR:  Hundreds of Mo Cycles are rotting at docking stations across the city due to the unending year-long stalemate between Bhubaneswar Smart City Ltd (BSCL) and Hero Youon Pvt Ltd over non-payment of GST amount.

Hero Youon, which manages the Hexi cycles under the public bicycle sharing (BPS) system in the Capital, is allegedly refusing to take the responsibility of operation and maintenance of 1,000 cycles introduced under the Mo Cycle project till all its dues are cleared.

Of 1,000 cycles, around 700 were in working condition at the time of handing over of the project to BSCL in October last year. However, in the absence of timely repair and maintenance, the remaining cycles are also lying unused.

A senior official of BSCL said Hero Youon, one of the three private firms providing Mo Cycle service in the city, has been served notice over the issue.

During a review meeting held recently, the BSCL also warned of blacklisting the company if it fails to ensure timely repair and maintenance of these cycles by February-end. 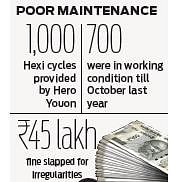 The firm while working under the Capital Region Urban Transport (CRUT) had also been fined around Rs 45 lakh over irregularities. Subsequently, the payments were blocked to adjust the fine amount, he added.

“The firm had claimed around Rs 40 lakh towards GST though it wasn’t paying any such tax to the government. When the management came to know about it, the firm was slapped with the penalty. Later, the Mo Cycle service came under the BSCL management,” the officer said.

Though the BSCL is providing around Rs 5,000 annually for operation and maintenance of each bicycle to the private agencies, Hero Youon is not spending the amount for this purpose, he alleged.

Refuting the BSCL allegations, an official from Hero Youon told this paper that, “We have not committed any irregularities. Rather the BSCL is not clearing our Rs 45 lakh towards GST which we had paid till March, 2019,” he said.

“We have all records of the payments made towards GST. Apart from GST amount, Rs 20 lakh towards other deposits and payments has been blocked. As a result, payment of the staff engaged for Hexi’s maintenance and operation has been pending for the last four months,” he added.

The service was introduced in the city for the World Cup Hockey in November 2018. Three service providers, Hexi, Yaana and Yulu, were engaged for the purpose. BSCL CEO Prem Chandra Chaudhary couldn’t be reached for his comments over the issue.

Now we are on Telegram too. Follow us for updates
TAGS
Mo Cycles BSCL Bhubaneswar Smart City Ltd GST